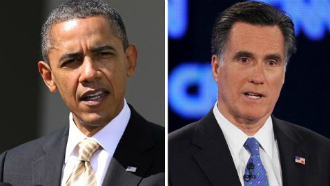 The Daily Caller reports that during a Monday morning conference call, President Obama‘s campaign adviser David Axelrod told reporters that “there’s a very clear distinction” between Obama and Mitt Romney over the issue of gay marriage.

“There couldn’t be a starker contrast on this issue than with Gov. Romney, who has funded efforts to roll back marriage laws in California and other places, who believes that we need a constitutional amendment banning the rights of gay couples to marry and would take us backward not forward,” Axelrod said.

The Daily Caller‘s article is titled “Obama campaign hits Romney on gay marriage — even though both are against it,” suggesting it’s hypocritical for Obama to attack Romney over an issue they supposedly agree on.

Yes, President Obama may be annoyingly slippery on gay marriage (he supported it before holding any office but is now…against it? Or something?), but one thing is for certain: he is not the same as Mitt Romney. They are both personally against same-sex marriage on the surface, but there is a very important distinction to be made.

Last August, Mitt Romney signed a National Organization for Marriage (NOM) pledge, vowing to “support and send to the states a federal marriage amendment defining marriage as one man and one woman.” President Obama is opposed to a federal amendment and has stopped defending DOMA in court.

While Governor of Massachusetts, Mitt Romney was a strong opponent of the state’s efforts to legalize same-sex marriage; President Obama came out against North Carolina’s proposed gay marriage ban.

The distinction is clear: Obama is (perhaps ironically?) opposed to using the government to impose his views — however slippery they may be — onto everyone else.

If only he applied that reluctance to other policy areas.