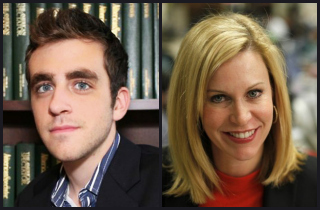 This is what passes as journalism these days. And no, this wasn’t written by a jilted 15-year-old penning a Dear Diary entry for the first time:

“A loathsome creature like Stephanie Cutter, the roots jutting out from her blonde dye job as black as the recesses of her soul, can push her way onto national television to sit next to a former Speaker of the House and two sitting U.S. senators. A charmless, dead-eyed, tacky sociopath with no sense of ethics, an empty shell spewing her flat-throated bile without the slightest trace of self-awareness, can beat all of us to the front of the Darwinian line.”

Yup, that’s how someone named Patrick Howley of the Daily Caller decided to review CNN’s Crossfire reboot, which debuted Monday night. Forget about content, forget about any thoughts around the other co-host of the program on its opening night (Newt Gingrich). This Pulitzer piece was aimed squarely at Ms. Cutter, a prominent member of Team Obama’s re-election campaign in 2012.

Before we continue, know this: As stated in this space before, I voted for Mitt Romney. This isn’t one liberal protecting another. And no, I’ve never met Stephanie Cutter. From what I’ve observed, she’s an effective media-facing resource to have on any campaign.

Did she engage in stretching the truth, in hyperbole? Of course. All campaign operatives do it, and Ms. Cutter had no problem getting her hands dirty in 2012… but let’s not pretend this kind of behavior only happens on the Democratic side of the aisle.

Given her resume and the trend around hiring politicos while they’re still fresh in the public eye, landing Ms. Cutter was bound to happen at one of the big three cable networks. The easy pick would have been MSNBC, where Cutter would have been quite cozy among former co-workers David Axelrod and Robert Gibbs while fielding tee-ball questions from Mika to Matthews to Maddow.

But CNN won the race to Cutter instead. On Crossfire, her primary opponents will be the aforementioned Gingrich and former MSNBCer S.E. Cupp As also noted in this space, Ms. Cupp was destined for stardom since her frequent nights as a guest on Fox’s Red Eye, which helped in securing a co-hosting spot on MSNBC’s The Cycle.

Few people know how to own the screen. Cupp is one of them.

As we know, the Daily Caller is a right-leaning website. Nothing wrong with that. For every Caller, there’s a Mother Jones or a Daily Kos. But to attack a host so personally, to go so much into the physical realm, to attack a successful woman so viciously, was downright disturbing to read. Howley comes across like one of Dexter Morgan’s adversaries, like that scary guy sororities are forced to call ADT to install an alarm system for. Never have I witnessed one writer so angrily attack a television personality. And this comes from a guy who can jump into the snark tank from time to time, but never went after someone, especially a woman, based on appearance (Note: I have wondered aloud why Rachel Maddow only wears glasses during guest appearances on other programs, but that’s a benign and valid question that demands an answer).

“She is Carrie Bradshaw without the literacy, Chelsea Handler without the punch lines, Kirsten Powers without the prettiness, gorging her face with the spoils of ill-gotten first-world privilege. How did we allow this American with a Social Security number to power-walk through the halls of our society for 44 years (yes, Stephanie, forty-four) without recognizing the warning signs? …What perverted kind of ‘Q’ rating could have convinced these cable executives that middle-income 18-to-49 year olds desire an evening date with this catty air-kissing backstabbing specimen?”

So in HowleyWorld, Ms. Cutter can’t read, is humorless, ugly, and privileged. The last part is particularly interesting to anyone who knows how to use the Google machine, as Cutter’s mother was a school teacher and her brother felt so first-world, he decided to enlist and serve in Afghanistan.

Howley also broaches Cutter’s IQ of having a 90-IQ. In a related story, Cutter graduated from Smith College and Georgetown Law.

If you want to attack a program on its merits, its content — fine. That’s what some of us are paid to do. Want to take a shot at the host for something he or she said? Go for it. Fair game.

But the territory Patrick Howley invades here has no place in journalism.

Here’s one more from Howley on Cutter for the road:

“A figure of hatred and dishonesty, a person devoid of any pleasantness or redeeming human value, a treadmill-stomping, Starbucks-chugging monument to modern self-absorption, someone incapable of appreciating good art, fine food, or the love or kindness of her fellow man, can shove and kick and lie her way ahead of the rest of us in this misbegotten society.”