In His Own Words: Colin Kaepernick’s Anthem Protest Was Against The Flag And The Country
Opinion

In His Own Words: Colin Kaepernick’s Anthem Protest Was Against The Flag And The Country 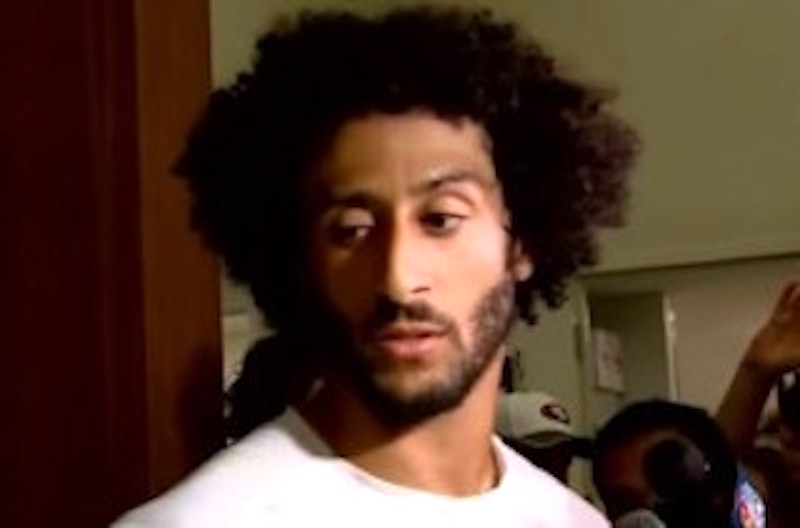 When Colin Kaepernick‘s national anthem protests began during the 2016 pre-season, he affirmed to reporters at the time that he refused to stand because he did not want to honor the flag of the United States of America.

It was August 26, 2016 and Kaepernick’s San Francisco 49ers were playing the Green Bay Packers in a preseason contest. Kaepernick, recently relegated to bench-warmer status for the team he had once led to the Super Bowl, chose to stay seated on that bench while the rest of his team and everyone else at Levi’s Stadium in Santa Clara, CA rose to their feet in a sign of unity for our country. (Yes, there was a time when simply standing was the “sign of unity” we showed during the national anthem, no linking of arms needed.)

Kaepernick had already sat during the anthem on at least one other preseason game, but not enough people had given him enough attention over it so this time, he gave and exclusive interview to Steve Wyche at NFL.com:

“I am not going to stand up to show pride in a flag for a country that oppresses black people and people of color. To me, this is bigger than football and it would be selfish on my part to look the other way. There are bodies in the street and people getting paid leave and getting away with murder.”

Kaepernick is the “Rosa Parks” of the NFL anthem protests so his original motivation, at the very moment that the movement began, is critical. His words are clear. “I am not going to stand up to show pride in a flag for a country that oppresses black people and people of color.” Now, it’s clear that what Kaepernick perceives as an inherent racism that permeates the country’s judicial system resulting in the murder of innocent black Americans at the hands of the government is what is animating his opinion of the flag and the country. But it is intellectually dishonest to say that his refusal to stand was not meant as a protest against the flag.

It was, and it still is.

He refused to stand because he did not want to “show pride in a flag for a country.” That’s what he said. Why that country and flag do not deserve Kaepernick’s pride is not irrelevant, but it also can’t inoculate the fact that the action – the choice- to not stand was clearly meant to send a signal of disrespect for the symbol and the country it symbolizes.

This is an important historic point because in the wake of President Donald Trump’s Alabama speech last week expressing his wish that NFL owners would fire those “sons of bitches” who do not stand during the national anthem, one of the frequent defenses we’ve heard in the media is that the protests were not against the flag or the country, but merely against police brutality.

Earlier this week, Michael Eric Dyson injected this historical revisionism into his segment on CNN.

Most Americans, I suspect, can see through the mental game of Twister being played by those who insist that willfully not standing for the anthem during the traditional moment Americans honor the flag and our country has nothing to do with the flag or the country. To say that the protest is not against the flag or the country is not only historically incorrect and intellectually dishonest, it also defies reasonable logic.