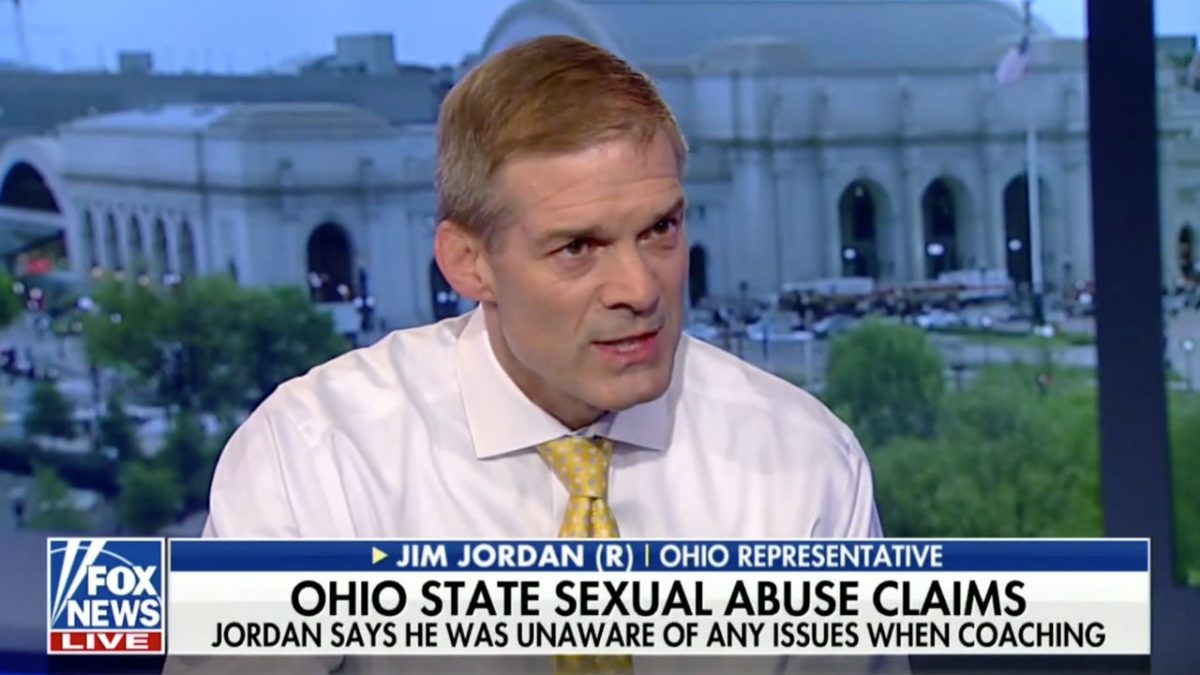 I have been very concerned since the start of the #MeToo movement that the news media is dramatically changing the rules and standards for reporting allegations regarding sexual abuse. This week’s media coverage of prominent GOP Congressman Jim Jordan, alleging that he covered up sex abuse as a wrestling coach at Ohio State about 25 years ago (a charge he categorically denies), appears to have dropped the threshold for reporting on such stories to an exceptionally dangerous new low.

For context, let me say that, thanks to my extensive and extraordinarily painful experience investigating the Penn State/Joe Paterno/Jerry Sandusky case, I am exceedingly hesitant to jump into any similar situations, especially with an opinion I know will be castigated regardless of its merit. I also happen to loathe Rep. Jordan, as he is a pathetic sycophant on behalf of President Donald Trump.

Despite my personal misgivings, there are so many very significant problems with how this story has exploded out of nowhere, and how it has evolved to create a narrative that lots of former Ohio State wrestlers now say Jordan “knew” of sexual abuse being perpetrated by Dr. Richard Strauss, I feel compelled to speak out. This is especially so because it is clear no one else in the gutless and ultra-politically correct media is likely to do so.

The most obvious problem with this story is that it is not even Jordan who is being accused of committing acts of sexual abuse (though from my experience with the Paterno case I am quite certain that huge portions of the population who have heard about this story wrongly presume it is Jordan who allegedly did the abusing, with poor media coverage/headlines being largely to blame for that). The alleged abuser is Dr. Richard Strauss, who was the team doctor for the Ohio State wrestling team while Jordan was an assistant coach there decades ago.

But it’s not just that Jordan isn’t the person being accused of abuse. It’s that Strauss has been dead for thirteen years and was never charged with a crime, or apparently sued, or even reported, in relation to these allegations. Barring massive amounts of evidence (including I would think some documentary evidence) to overcome this obvious roadblock, I believe it should have been “checkmate” right there for this story ever being reported in the first place.

Based on conversations I have had with people close to this story, I believe that Strauss may indeed be guilty of abuse, though the reporting on this case being so long after the fact makes it difficult to discern exactly which criminal acts he allegedly committed. However, with the first public accusations coming so far after his death, it would be difficult to conclusively prove his guilt now.

The media should have been beyond wary of offering a venue for people, especially very public figures, to be accused of engaging in a cover up of something that might never be able to prove happened in the first place. To set a precedent otherwise is a recipe for total chaos and injustice.

But since we are now far past that point of no return, let’s address what is it that Jordan supposedly “knew” about these alleged crimes. The news media is now keeping track of the number of wrestlers who say Jordan had to “know,” with each increase to the tote board causing headlines which are highly misleading.

Of the seven wrestlers the media has cited, and thereby created a “strength in numbers” case against Jordan (since there is not one of them so far whose story is remotely bullet-proof), there are at most two, and maybe only one, who actually claim to have directly told him that Dr. Strauss was doing something inappropriate. Both of them have real credibility problems, on multiple levels, which I believe to be more significant than even what is currently in the public record. The rest all say almost exactly the same thing: that Strauss’ behavior was so openly discussed that Jordan just had to know, but they didn’t personally tell him anything directly. That is a very different reality from the nefarious perception the many headlines provoked by this constant headcount is creating.

Ironically, the best evidence that Jordan might have done something seriously wrong is that President Trump is strongly supporting him. Other than that, there’s almost nothing solid.

These episodes having supposedly happened at least 25 years ago causes other problems than just those related to the unreliable memory of human beings. The early 1990s were also a very different time culturally with regard to the understanding of sexual abuse. The Catholic Church Scandal was not publicly known yet, and being told that a male doctor asks mostly college-aged male athletes to pull their pants down unnecessarily would not have set off nearly the alarm bells that it would today.

The timing of these allegations coming to light also creates inherent suspicion about their intent. We are obviously in the middle of a red-hot midterm election and Jordan, who has been touted as possibly the next Speaker of House, is running for reelection. As a conservative, I can’t help suspect that this story would have been deemed, correctly, to not meet the evidentiary threshold if it was about a Democrat in a similar position.

The other element of the timing of all of this which seems rather suspect is that the allegations were admittedly provoked by Ohio State’s fellow Big 10 Conference member, Michigan State, paying hundreds of millions of dollars to the victims of their athletic doctor, Larry Nassar. I’m not saying that this means the allegations against Strauss are not valid, but there is absolutely a potential financial motive involved here, and in a courtroom it would have been highlighted that bringing Jordan into the story provided these accusers with far more publicity against Ohio State than anything else they could have done.

So there are far more legitimate reasons to question what really happened here than the media is pretending that there are. Fortunately for them, Jordan is responding rather poorly, with his story appearing to shift slightly and him absurdly implying that this may have something to do with his role in trying to torpedo the investigation into Russian meddling into the 2016 campaign.

It remains the case that no one ever reported Strauss. As the wrestler who initially brought the allegations said, few thought at the time that they were being “sexually abused,” and the alleged actions of Strauss were allegedly brought up in “locker room conversations,” often in a joking manner. It was very common in that era for guys to kid about doctors who seemed to enjoy giving the “cough test” a bit too much, and I doubt that those who heard about but did not directly experience what was going on with Strauss thought of it as a huge deal (after all, apparently none of them reported it to authorities of any kind).

Even if Jordan is “guilty” as “charged” here, there would still be very dangerous precedents being set if his career is destroyed by the snowballing of this story. Think about it. Under the new rules the media feeding frenzy that followed the initial allegations, any politician running for reelection who once worked with someone who is accused of sex abuse many years later (long after they are dead) can now, without any court case of any kind ever having been brought, be taken out with the well-timed words of just a few people with a potential financial or political incentive to embellish a story.

Regardless of how you feel about Jim Jordan, that should scare you. And regardless of what really happened with him and Dr. Strauss, the media should be condemned for its abdication of standards.