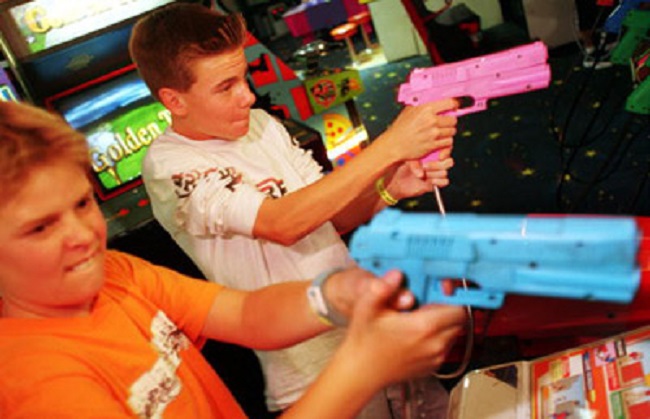 On Sunday’s State of the Union with Jake Tapper on CNN former Senator (and presidential candidate) Rick Santorum suggested violent acts depicted in television programming, films and video games bear some responsibility on gun violence and, in particular, mass shootings.

As reported here at Mediaite, Santorum suggested that while the political left consistently focuses on gun control and infringements on the Second Amendment, violent depictions should bear some (if not equal) responsibility for tragedies like last week’s mass murder in Las Vegas:

He would keep going on about Hollywood.

It’s a common (and, frankly, predictable) response from social conservatives trying to parry and deflect attacks on the right to keep and bear arms and it’s a clever rhetorical diversion often employed by my fellow conservatives while engaged in these television debates where they often find themselves grossly outnumbered by the panelists and usually the moderator.

But it’s an ill-advised tactic and they’re wrong in raising the notion that the First Amendment should be infringed upon for the sake of keeping the Second Amendment in tact.

1. It’s about our rights, not about winning debating points

If we are arguing  that our right to keep and bear arms for self-protection is inherent and is articulated in the Bill of Rights to ensure that the government must not infringe upon that right, than why are we so eager to suggest that the government should step in and examine the content of works of art and entertainment like films and video games? It seems to be more than a little inconsistent to call for potential legislation regulating the First Amendment “for the sake of the children” or some other emotional argument all the while raising objections to nearly any regulation currently suggested on the Second Amendment.

You either believe in our constitutionally-protected rights or you don’t. You either believe our right to bear arms is just as sacrosanct from obtrusive government regulation as our right to free speech, press, expression and faith or you don’t. The Bill of Rights is not a cafeteria and you can’t pick which rights you love and which you’re open to seeing meddled with by the likes of Elizabeth Warren and Al Franken.

2. Millions of gamers play violent games without ever harming a soul

It’s ironic that nearly every argument my fellow conservatives would make on behalf of legal gun owners in America are just as relevant and effective with regard to those who play violent video games, yet for some reason they ignore that logic when attacking an industry and art form that I’m pretty sure they just don’t understand.

How many times have we argued that the millions and millions of responsible, legal gun owners in America are not criminals and they do not commit crimes so it would be irresponsible and unjust to punish them with gun controls because of the actions of criminals and psychopaths? And yet, the exact same can be said about gamers and consumers of violent programming emanating from Hollywood. Millions and millions of gamers are somehow able to play first-person shooter games without ever resulting to real-world violence. Why restrict their freedoms because some psychopath couldn’t do the same?

In the same way millions of peaceful, law-abiding gun owners should not have their rights trampled on or even challenged because of the criminal acts of the few, so too should gamers not have to defend themselves from rhetorical and legislative attacks because a mass shooter may have played Call of Duty before their evil rampage.

When our political and ideological opponents blame the availability of weapons for violence in our culture and our go-to response is to blame Hollywood and video games for that same violence, we sound like we’re deflecting. And there’s no reason why we should. The Left wants to engage in a “conversation” about guns and they frame each aspect of the conversation from the perspective of regulating, restricting, banning and “buying back” (confiscating) legally protected firearms and we hide from the argument and point the finger at Overwatch and Django Unchained?  Why?

Oh, I know, the Left will point to public opinion polls that claim to support restrictions on the Second Amendment, but they also pointed to polls that said Donald Trump didn’t have a chance to be president. Spare me the polls. Let’s look at election results, those tend to matter more.

Consistently, the American people, despite what they might tell Mr. Gallup, vote for candidates who want to protect their self-protection freedom, not infringe upon it. Only a Republican can have all the facts on their side and a winning message and then run from the argument by raising a red herring like “video game violence”. And yet, we keep doing it.

Freedom is a winning message, if you can’t sell that, as Andrew Breitbart famously said,”you suck.”

4. You sound like you don’t know what you’re talking about

Conservatives on TV, elected officials and even you and I when we engage in a Facebook debate with friends and family have an obligation to try to persuade people to consider our ideas. When your argument that pretend violence brings on real violence  falls on the ears of a millennial gamer who enjoys action films and The Walking Dead, they immediately smell the bullshit from their living rooms.

I like Rick Santorum, but I suspect the last time he played a video game was when Atari was big. Think of the millions and millions of gamers who play violent video games and then hear a guy on TV say they are more inclined to murder innocent people because of them. They know it’s false and they not only tune out the message, but they’ll tune out the rest of our messages too. If conservatives are willing to sound so ignorant on this issue, they’re probably reasoning, why should I trust them on taxation, spending or the use of military force?

Not only that, but the argument fits into the perfect stereotype that pop-culture loves to project onto conservatives. The old, out of touch, culturally archaic, old fart pining for the days of Ozzie and Harriet and telling all those young kids to get off his lawn. That’s not how you draw new people to your side of the political and cultural divide. I’m a conservative. I watch Game of Thrones (a pretty violent show) and I play violent video games. Hell, just today I killed thousands of demons and aliens in Diablo III and Halo and I’m still feeling pretty peaceful. Am I kicked out of the club now?

Be careful what you wish for. By jumping out and saying “what about video games and violence from Hollywood? They cause these mass shootings!” we are opening ourselves up to the Left calling our bluff and attempting to strike some sort of grand, master deal that would restrict both the First and the Second Amendment freedoms we enjoy.

I can see it now: Dianne Feinstein or Cory Booker stepping forward on the floor of the senate saying “My good friend from the state of ‘Democrats-Never-Win-There’ is right. I join him in his condemnation of the violence running rampant in video games and television shows and that’s why I’ve put forth this comprehensive ‘Ban Violent Depictions and Semi-Automatic Weapons Act’ that I’m sure he will join me in co-sponsoring.”

Of course this will happen. Because infringing on our rights is what the Left does. They’ll be just fine trading away some First Amendment freedoms for the sake of restricting Second Amendment freedoms.  They’re the Left. Restricting freedoms and consolidating power in the hands of a central, authoritarian government is a basic tenant of the political Left. It’s what they do. Whether it’s through education or health care or guns and speech… open the door for them, they will plow right through. Why make it sound like we’re even remotely open to the idea?

Which brings us to number six…

“Never let a good crisis go to waste” is a tenant of the activist and craven political Left. Let’s not fall into that trap. Seeing a terrible event and then rushing to make political hay out of it by legislating away freedoms for the sake of “doing something” (especially if it’s “for the children”) is what they do. When we hop in front of a cable news camera and play a game of empathy poker where we see their condemnation of gun rights and raise them a healthy amount of denouncement of free expression rights we sound like we’re trying to out-liberal them. Let’s be different.

Let’s say that as conservatives we respect individual rights and liberties. As awful as these mass murders are (and they are despicable, soul-wrenching events) they are not an opportunity to display our aptitude for moral preening by condemning fellow Americans for peaceful exercising their rights in a way that we don’t approve. Let’s set ourselves apart from them.

One final thought… on “studies.”

Santorum said “there is a mountain of evidence out there, psychological evidence, about what we’re doing to our young people with these video games,” and yeah, there are studies that suggest that. There are also studies that negate those studies. So what?

Since when do conservative wish to legislate based on the latest study? If we walk down that path, where’s our argument against economy-crushing, government control of  our land use and energy consumption in the name of climate change science? After all… there’s this study, you know…

You can find a study to support pretty much any hypothesis on these evil acts. The point is, they are evil acts. As frightening as it may be to face, evil acts have been a part of human history since it began and no amount of freedom-restricting legislation will alter that basic, fundamental truth. When forced to confront that reality, we must all weigh the importance of our basic, fundamental rights enjoyed by the vast majority of us who act responsibly and follow our laws  and our very human desire to try to prevent the next evil act from happening by doing something.

As a very wise woman recently wrote in an article you should read next: Evil acts don’t cancel out a law-abiding citizen’s rights. Even the right to play a video game in peace.