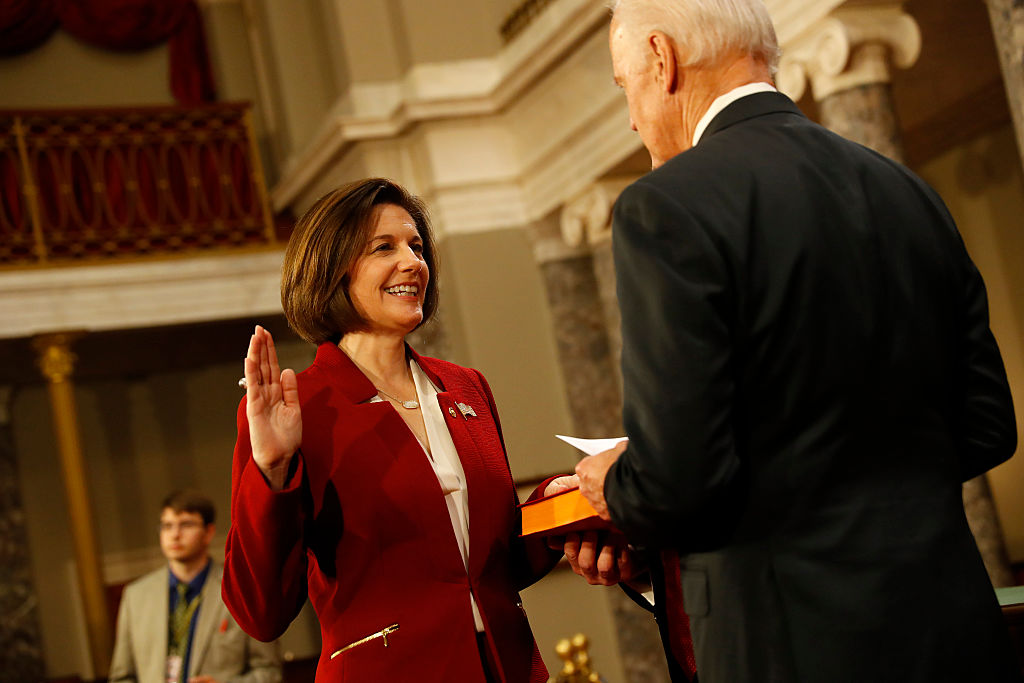 Former Senate Majority Leader and longtime Nevada powerbroker Harry Reid has in recent weeks told former vice president Joe Biden that he supports Sen. Catherine Cortez Masto as his vice presidential nominee, as part of an effort to give a shot in the arm to his Latino support as the general election comes into view, with Biden telling Reid that she is in his “top three” for the role, three sources confirmed to Mediaite.

Biden and Reid have been speaking regularly since the Nevada caucus, but Biden mentioning her as a top three vice presidential pick came up during the last week, a source with knowledge of the conversation said.

A source close to the Biden campaign said Biden has privately mentioned Cortez Masto as someone who would be on his shortlist for vice president and said he really likes and respects her, appreciates her intellect and leadership, and the history she made as the first Latina U.S. senator.

Critically, Reid is not just sharing his thoughts with Biden, but is someone whose counsel Biden heeds, with the campaign acknowledging internally that it must strengthen its support from Latino voters in an expected general election matchup with President Donald Trump, who doesn’t need to win the Hispanic vote, just erode margins enough in key states.

Reid has additionally encouraged a new behind the scenes effort to get national Latino advocacy groups to support Cortez Masto for vice president, because of the strong support within the party for other popular women senators, like Sen. Elizabeth Warren, who could energize progressives dispirited over Sen. Bernie Sanders flagging campaign, and Sen. Kamala Harris, who is among the black women powerful Biden ally Rep. Jim Clyburn has said Biden should choose from.

The Biden campaign did not dispute the conversations between Reid and Biden, but declined to address them or Cortez Masto as an option, saying only that Biden is familiar with the process of selecting a vice presidential candidate, having been through the process in 2008 and that it will run a vigorous vetting process. Speaking to donors on a Sunday fundraising call, Biden said he is considering at least seven women. “We are going to start vetting soon and there is a shortlist,” he told The View two days later.

But Latino leaders told Mediaite Cortez Masto would be an important choice for Biden in an effort to grow the diversity at the top of the ticket, as well as the geographic balance energizing voters in the southwest, where Sanders showed strength during the primary thus far, including with Latinos, beating Biden in Nevada and Colorado, while Biden won in Arizona.

Mayra Macias, the executive director of Latino Victory Fund, which endorsed Biden ahead of the Nevada caucus and pushed him on a moratorium on deportations during his first 100 days as president, said Latino groups, including her own, have been consistently frustrated by lists for vice president from news organizations and Democrats that exclude Latinas, after Biden committed to naming a woman as his vice presidential nominee.

“When we’re thinking about who is a good partner, not just to beat Donald Trump, but to win down-ballot, what better person than Catherine Cortez Masto, who is at the helm in Nevada in such a critical state, has governance experience, and whose political acumen is counted on as the chair of the DSCC, with a goal to flip the U.S. senate?” she asked. “If we want progressive goals in this country it’s not enough to win the White House, and she’s the best positioned to help do that.”

Hector Sanchez, executive director of leading grassroots organization Mi Familia Vota, said the Latino community will be critically important to the election of the next president. “We are the largest non-white voting population, our community is engaged, and fired up. Vice President Biden would be smart to pick a Latina running mate like Catherine Cortez Masto to defeat the most extreme anti-Latino and anti-immigrant president in our history,” he said.

Cortez Masto would bring geographical balance and the prospect of a history-making pick, said CNN contributor Maria Cardona, noting that while Biden has shown strength with black voters, Latino support has been a “weak spot” despite improving in recent contests.

“It would be an incredible tool to reach out and mobilize a community that he has been a little bit wanting in,” Cardona said, adding that Cortez Masto is at the top of her own personal list, having known her for many years, and bringing strengths to the table for Biden “as a former attorney general, who has been terrific on issues of criminal justice, as well as rule of law.” 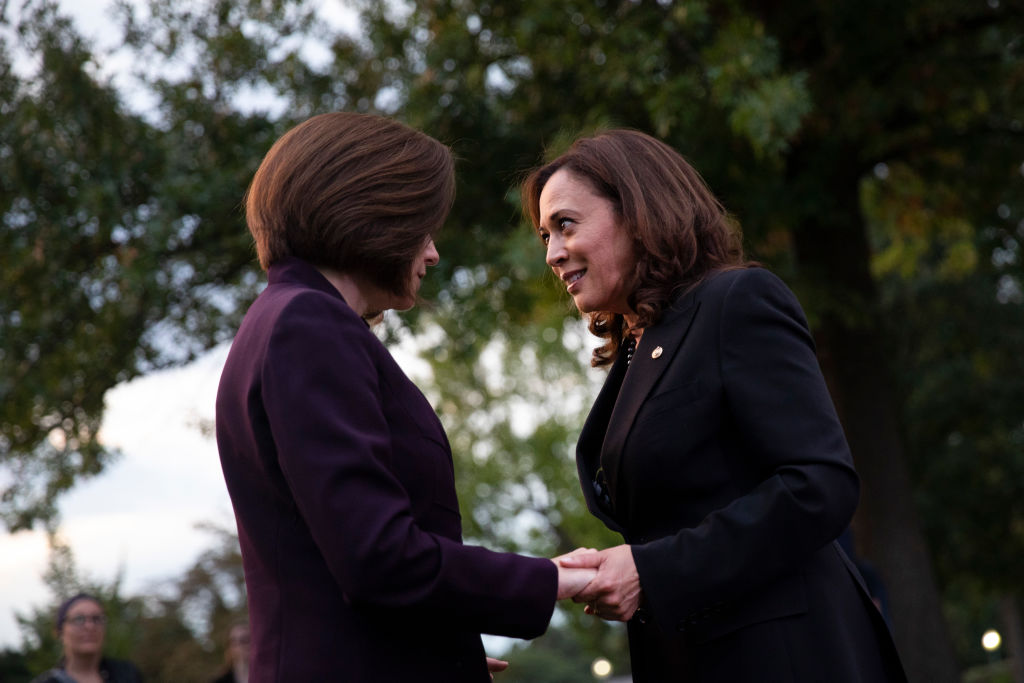 A source familiar with Reid’s calls with Biden said the idea that has been floated is that Cortez Masto, who is in many ways an heir to the Reid machine, which grew Latino support to record levels during his tenure, would take a leading role on Latino engagement and policy aimed at the community should she be chosen as Biden’s vice presidential nominee.

Exit polls showed that Cortez Masto won a majority, but not overly impressive, 61% of the Latino vote during the 2016 election, but a precinct-level analysis by political scientists disputed that figure, saying her support from Nevada Latinos was actually 88%. At the same time the Latino community is not monolithic, though parties and pundits sometimes describe it as such, and Cortez Masto would be unfamiliar to voters in the swing state of Florida, for example.

But a complicating factor for the forces looking to boost Cortez Masto is influential progressive Rep. Alexandria Ocasio-Cortez, who they hope would support the Nevada senator, while someone like Warren, who Ocasio-Cortez lines up with better ideologically, is also an option to join Biden. A source familiar with Ocasio-Cortez’s thinking told Mediaite that for the congresswoman, “identity” is not as important as “policy commitment.” The Bronx representative and Sanders surrogate, the source said, doesn’t believe it’s right to make moves based on “identity without them being backed up by real policy commitments to the Latino community.”

Sources involved with the effort to nominate Cortez Masto believe Ocasio-Cortez’s reservations would be addressed once she learns of the Nevada senator’s history advocating for Latinos and immigrants, but also say the expectation is that her nomination would add a much-needed influential voice to Biden’s inner circle on policy aimed at Latinos, something Biden doesn’t lack when it comes to African-Americans, for example, with Clyburn and campaign co-chair Cedric Richmond having a direct line to the former vice president.

In many ways, efforts to elbow Cortez Masto into the vice presidential conversation at this stage reflect the advantages Warren, Harris, and others have as well. A Biden advisor told POLITICO the campaign is getting “a lot of pressure” to pick Warren within the party, Harris is viewed as young and dynamic and black voters have shown up for Biden, and even someone like Stacey Abrams is widely liked and would satisfy Clyburn’s weighty opinion that Biden should choose a black woman as his running mate. Sen. Amy Klobuchar and Michigan Gov. Gretchen Whitmer also offered Biden major endorsements before he won the Minnesota and Michigan primaries, respectively.

The presidential campaign has in recent weeks taken a backseat to the dire coronavirus crisis, but Biden has reemerged with press conferences and TV appearances from his home studio, slamming Trump for his response to the growing pandemic. Cardona said her worry is that Republicans are OK with pausing the election and delaying the contrasts between Trump and Biden, which put the 2020 choice in stark relief.

“We have seen the epic failure of Donald Trump,” she said. “Biden and Catherine Cortez Masto would be an incredibly powerful tool to show the contrast with the current failure of the commander and chief and his administration.”

A source familiar with the effort to boost Cortez Masto similarly previewed the stakes.

“The point is for us to build a unified campaign behind her,” the source said. “We can’t afford for people to stay home, especially not Latinos.”