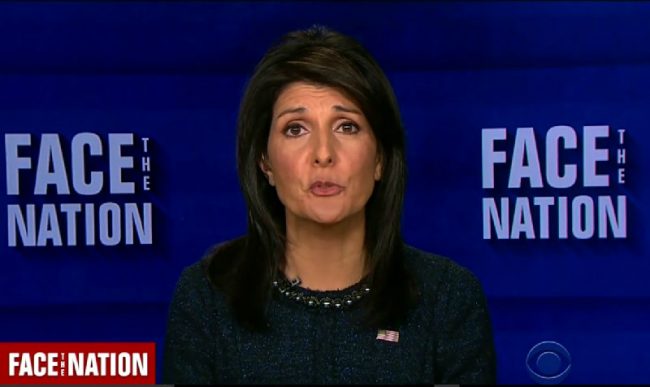 After politics took center stage at this year’s Grammy Awards by way of Hillary Clinton doing a “spoken word” reading of Michael Wolff’s book Fire and Fury, UN Ambassador Nikki Haley was not impressed with the mix of “great music with trash.”

“I have always loved the Grammys but to have artists read the Fire and Fury book killed it. Don’t ruin great music with trash. Some of us love music without the politics thrown in it,” tweeted Haley immediately after the Clinton segment.

I have always loved the Grammys but to have artists read the Fire and Fury book killed it. Don’t ruin great music with trash. Some of us love music without the politics thrown in it.

She also tweeted that the Fire and Fury gag completely “ruined the Grammys.”

“Such a shame,” added Haley.

Of course, the takeaway here is the US Ambassador to the UN believes music shouldn’t be mixed with politics — which makes one wonder if Haley has heard any music aside from the happy birthday and ice cream truck songs. Just no one tell her that some of the biggest hit makers in the history of art — like The Rolling Stones, The Beatles, Jimi Hendrix, and Bob Dylan — all had highly politicized music.

The segment that enraged Haley was a pre-recorded clip of Clinton, Snoop Dogg, John Legend, Cardi B, DJ Khaled, and others reading excerpts of the notorious Fire and Fury book, which is a highly disputed insider account of President Donald Trump’s administration.

It is worth noting that Haley might just be upset at Wolff himself — and not politically-focused music — as the author has spread baseless rumors the ambassador and Trump had an affair.

For her stick-to-music suggestion, Haley was demolished on Twitter as many pundits, journalists, and influencers made the point that music has long been politically focused:

If you thought music was free from politics before someone picked up a book for a gag at the #GRAMMYs, you probably weren’t listening to the lyrics

Nikki Haley being upset about the use of Fire & Fury as a gag when it fueled hurtful rumors about her is completely understandable.

But Nikki Haley saying she wants music without politics is absolutely laughable.

Heres the clip. Judge for yourself. Its a gag, and judging by the audience reaction, a pretty effective one. Seems odd to be offended given how Trump gratuitously insults others. Don’t dish it out if you can’t take it. pic.twitter.com/Ag1h1q8NPk

“The song ‘Ohio’ by Crosby, Still and Nash is a pleasant song about a wonderful state I hope to visit again soon!” –Nikki Haley, probably

“Lennon’s ‘Imagine’ is my favorite song about the power of imagination. A great song for the kids!” –Nikki Haley, probably

Nikki Haley hates @MichaelWolffNYC book. So she does everything she can to sell more copies. https://t.co/zsbaufI7dz

It’s funny that Nikki Haley decided to criticize musicians for making music political on the same day her boss decided to use the presidential bully pulpit to attack Jay-Z.