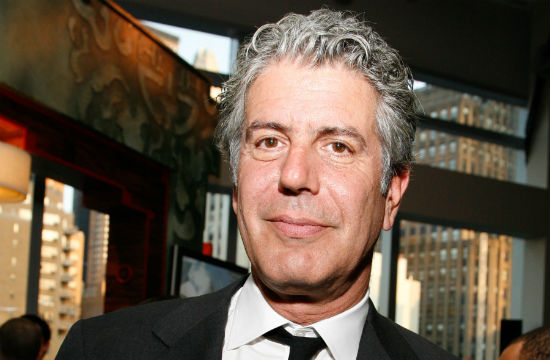 Anthony Bourdain made it into the pages of AdWeek’s food issue, and, of course, they were curious about his recent move to CNN. While he’s already spoken at length about how working for a news outlet afforded him the opportunity to travel to more dangerous places which he may not have access to at The Travel Channel, Tony admits that one key component of the meal helped foster peace as he broke bread with some of America’s enemies.

“The willingness to drink indigenous beverages is one of the reasons that we’ve been able to get access,” he said of traveling to a few of the touchier places on his travel wish list.

But he also visits plenty of touristy destinations, and, Bourdain confesses, the challenge there is to do something different. Remember that Brooklyn episode he was spotted shooting with cast members of The Wire?

Just look around to see whose story hasn’t been told. We just did a Brooklyn show, and in one housing project with Michael K. Williams from The Wire, he spent the entire afternoon with a bunch of moms and grandmothers he grew up with, and he identified them by the food they used to cook when he was a little kid. And they were all from different Caribbean/West Indian cultures. In one square block, we met people from Guyana, from Trinidad, from Curaçao, Jamaica, all of whom had grown up in the same area. That in itself is a story. I could do nothing but Brooklyn shows for the rest of my career, and I could die ignorant.

But he won’t die ignorant. Because he gets to go to Saudi Arabia.