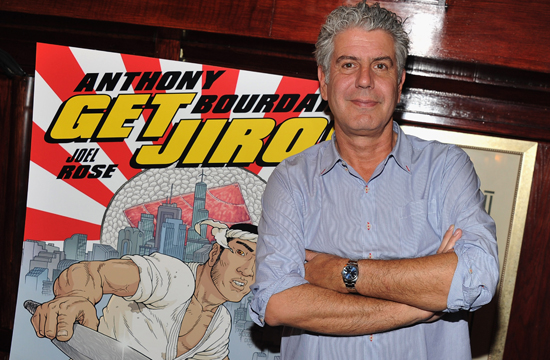 While Bourdain geeked out over greats like Will Eisner, Jack Kirby, and Spain Rodriguez, and praised the work of his coauthor Joel Rose and his artist Langdon Foss, CBR wanted to know the secrets to Bourdain’s cultural zeitgeistiness. Namely, why is it that food culture is now so big that you can write a comic book about it?

“I think one reason is movies suck so badly,” Bourdain responded. “It’s creating a huge market for other forms of entertainment.”

Okay, semi-counterpoint: movies may generally suck, but that’s largely for economic reasons rather than the decline of talent in Hollywood. (Roger Ebert has a succinct explanation here of why box office returns are at the lowest in decades.) But ignoring the question of “why do movies suck” and focusing on the consequences, Bourdain does have a point:  not only are people avoiding movie theaters, the Internet has turned the act of watching movies and television into a solitary experience. Going to restaurants, on the other hand, is always a group activity.

And his next point will likely with those who deem food culture the new rock music — (though he never explicitly states that):

I also think the fact that eating out has become a counter-cultural activity — that’s a big change. Young people without much money were not gourmets 20 years ago. Now there are hipsters everywhere who are really serious about food. Whether it’s a really good, really authentic bowl of Thai noodles or a high-end dining experience, it really doesn’t matter. The fact is that people at various income levels and types of backgrounds are really into food now. And in a lot of ways, we’re catching up with the rest of the world. We didn’t have much of a food culture 20 years ago and we’ve been making up for lost time — fast.