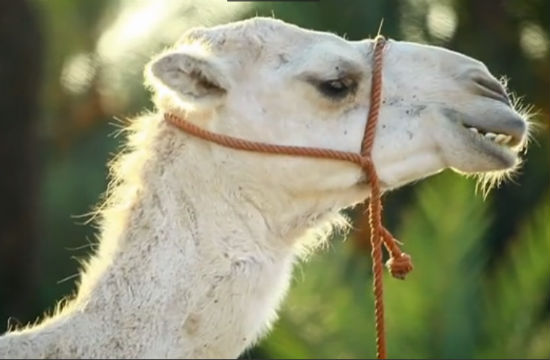 This week, on Around the World in 80 Plates, Game Master (?) Curtis Stone takes the competition to Marrakech, Morocco. Upon arriving in the motherland, Chaz and Gary drop and kiss the ground in reverence of their first time visiting Africa.

First stop on THE COURSE is the Medina, natch. Nookie is familiar with Marrakech from his world travels and already knows he hates it, for the BYO toilet paper factor among others. Man, did we underestimate Red Sox Chef Guy. He’s proving to be the most practical and evidently most well-traveled chef in the competition (although he doesn’t speak 42 languages like Jenna).

Before heading off to the Medina on a horse and carriage, the remaining cheftestants must split off into groups of — GASP PLOT TWIST — three. Nookie and Avery immediately pair off, as do French-speaking Gary and Chaz, who are excited about their home team advantage. Unfortunately, there’s also an all-girl team, consisting of Liz, Jenna, and Nicole, which could potentially be an issue, you know, gender-wise. We’ve all seen Sex and the City 2. Sure enough, the unchaperoned hussies are later hissed at by men while running willynilly through the vast market, prompting Jenna to ask if they can all stick a little closer. Jenna, chill out. You’re surrounded by cameras and producers. Don’t be a Real Housewife of New York.

Teams are stuck wandering the Medina looking for a single spice shop, where they will receive instructions regarding the next leg of THE COURSE. Nookie’s team is first to arrive and they learn they must find the nine spices that go into a traditional Ras El Hanout. Of course, none of the barrels in the spice shop are labeled. Follow your noses, chefs!

Nookie and Chaz jostle at the register, but eventually all three teams are on their way to the next stop — a rooftop tea shop called El Waha Restaurant. There, they must pour a million tiny cups of tea in the traditional Moroccan style, with straight elbows and from three feet in the air. They’re babysat by Moroccan tea masters for quality control, who beat them with sticks like scandalized, grade-school teaching nuns if they bend their elbows. Team Nookie/Avery/John finish first and win both access to THE EXCEPTIONAL INGREDIENT —- an expert on all things Morocco/Marrakech (basically a glorified tour guide) -— and $15,000.

For THE TAKEOVER, teams learn they must make a traditional Moroccan tagine as well as two other dishes. They all swarm the surrounding cafes to try and pinpoint the exact spice mixture in a tagine. In a small aside, we meet Jenna’s fiance via Skype, and he’s like toootally the bessst fiance everrr. He’s sooo perfect for her in EVERY way. Jenna’s boyfriend is Mary Poppins. Great, we’re happy for you, Jenna.

Meanwhile, back in the part of the game that matters, the all-boy team (Chaz/Gary/Nick) gets nervous about Avery’s mad skill and her impressive MVC record. After shopping for their ingredients at the bazaar, chefs hit the kitchen at THE TAKEOVER restaurant, and they’re surprised by its lack of fancy chef tools. Really, guys? What, no maltodextrine in Marrakech? Dang, guess you can’t show off your molecular gastronomy here.

Avery’s roast beets go missing and there’s a tiny episode of beet-gate before the wait staff locates them with Gary’s French-speaking assistance. Again, thanks to his Francophone specialties, he’s an at advantage with the non-English-speaking waiters.

Team Nookie/Avery/John’s food goes out but their white beans are undercooked. Team Motherland runs short on time while plating, and they start to gang up on Gary for wasting time helping Avery locate her missing beets. Also, their couscous is weird and their vegetables aren’t properly served.

Team Girl actually rocks out a dessert course and their tagine isn’t bad, either. They wind up winning, in the most legitimately shocking twist all series. Come on, they had Nervous Liz AND Annoying Jenna. Liz actually even wins Most Valued Chef for her cold couscous dish.

The losing teams have both formed alliances by this point, in case they wound up on the bottom. Team Motherlands wants to boot Avery in light of beet-gate and the fact that she keeps winning challenges. Nookie plays Team Motherland against each itself like a boss by pointing out that they couldn’t roast veggies and make couscous in 2 ½ hours. Uh, fair point.

Nookie, Avery, and John stick together and unanimously vote Chaz to go home. Team Motherland also unanimously votes Avery, which means we have OUR VERY FIRST TIE. What does this mean?! Will Curtis and Cat Cora make the final call? Will the sultan of Morocco come out and taste the losing dishes to decide who goes home? Nope, Curtis decides that, in the event of a tie, Most Valued Chef acts as the tie-breaker. Poor, fragile Liz looks like she’s going to die, but she ultimately chooses Chaz to go home because he’s a crappy team player.

Next stop: Firenze! Wine-tasting challenge, anyone?