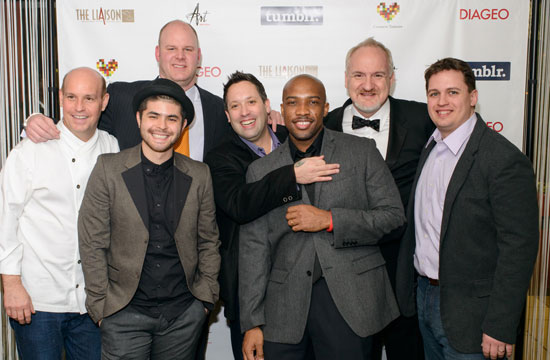 Late on Saturday night — past the bedtimes of most Washingtonians, even on Inauguration weekend — over five hundred people gathered in the Liaison Hotel for the Chef’s Ball fundraiser, dressed in everything from flowing ball gowns to spangly cocktail dresses, tuxedoes, sweaters, chinos, and gray flannel suits (worn spectacularly by Modern Family’s Jesse Tyler Ferguson). And, as host Art Smith told us in the middle of the raucous party, that was the point.

“I said to Jesus [Salgueiro, Smith’s husband], ‘What if we did a party that was all about chefs and bringing chefs together?” he told us about the ball, after we’d managed to steal Smith and his husband Salgueiro from a group of adoring fans dancing next to enormous speakers blaring Katy Perry — a scene we saw repeated over and over again, with several chefs. “It’s a rallying call. If you bring chefs in, everyone wants to come.”

Held at Smith’s restaurant Art and Soul, spitting distance from Capitol Hill, the event, with tickets starting at $75, was first and foremost a celebration of Barack Obama’s inauguration, as well as a charity fundraiser. But more importantly, it celebrated the status that chefs now hold in the District of Columbia, a town once reputed for bad steaks, cigars, and stiff drinks — helped transformed, in no small part, by the fact that the First Couple are both healthy eating advocates and notorious foodies.

Isabella joined Smith, as well as Art and Soul’s Wes Morton, Toki Underground’s Erik Bruner-Yang, Equinox’s Todd Gray, The Source’s Scott Drewno, and the DC Community Kitchen’s Rock Harper, as featured chefs at the event. Waiters in white bow ties (worn in support of gay marriage rights) circled around Art and Soul with dishes from each chef — crawfish pies, gyros and duck dumplings all quickly snatched up by hungry guests arriving from other inaugural balls. (Somehow, Smith managed to serve his famed chicken and waffles on a single skewer, and this reporter may have staked out a spot next to the kitchen entrance to get first dibs.)

Other DC celebrity appearances drew DC stares (CNN contributor Gayle King and Illinois Governor Pat Quinn were seen circling the room), but it was the chefs who’d become the center of attention, even the ones working outside the kitchen: Top Chef: Seattle’s Bart Vandaele and Jeffrey Jew, both with deep roots in the city, were surrounded by gaggles of fans.

“Coming back to DC, everyone recognizes me,” Jew, who recently moved to Florida, observed. “I’ve had conversations with a lot of foodies who are, like, ‘You need to open a restaurant here! DC’s your home! Why aren’t you here? DC is where it is!’ And,” he ceded, “DC is becoming a big, big thing.”

As Bruner-Yang pointed out, the Obamas’ presence in Washington nurtured this creative boom — though not simply from the First Couple’s patronage of the city’s restaurants. “I think it had less to do with their personal preference, but more to do with the type of people that moved into the city because they were in power,” the 28-year-old chef noted — and indeed, the hotel was packed with cool, young, sophisticated twenty-to-thirtysomethings unabashedly dancing to Jay-Z and downing coconut fish curry.

But ultimately, for Smith, chef-ly influence and power wasn’t derived from trends or fashion. “In two weeks, I’m cooking for the Bush family,” he told us. “Fried chicken takes no sides. Our objective is to create something that will last many, many administrations…Everyone deserves a good meal, regardless of who they are.”

“There’s never been a more greater time to be a chef than now,” he added. “And this party is to show that chefs wear many hats. They’re the philanthropists. They’re the peacekeepers. They’re also running restaurants and taking care of people.”

And, at the end of the night, the chefs were the center of the Washington universe.