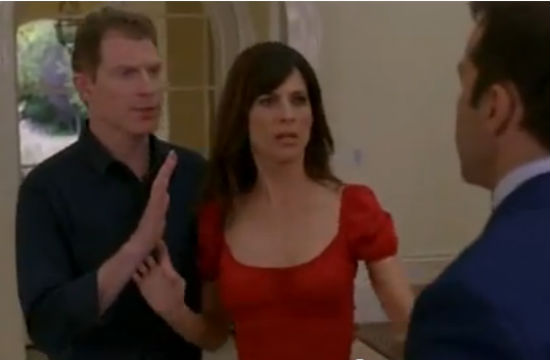 Bobby Flay boasts one of the richest filmographies of any celebrity chef on our radar; richer even than those of Wolfgang Puck, or seasoned Treme actor David Chang. Most likely, we have Bobby marrying way out of his league to thank for his storied cameo career. He just so happens to be attached to everyone’s favorite Law & Order: SVU Assistant District Attorney Alexandra Cabot AKA Stephanie March. (It helps to know people.) Check out his totally respectable body of work (clips included!) below.

Impressively, Bobby snagged a cameo as himself on a Disney Channel Original Movie called Eddie’s Million Dollar Cook-Off in 2003, before Stephanie ever got his foot in the door at L&O. (That, in acting circles, is how you know he’s legit.)

It’s a classic tale with hideously gendered overtones about how boys only play baseball and girls only enter cooking competitions (HAHA?!) and never the twain shall meet. There’s a sweet tomboy named Hannah who lies and tells her mom that she’s the baseball team’s cheerleader, when really she’s the star shortstop (but she’s a cheerleader). And there’s Eddie Ogden: coach’s son, star athlete, and closet kid-chef.

Basically, no one’s parents approve of anything, and Eddie has to lie his way into a Million Dollar Cook-Off, the grand prize of which is a chance to study at a renowned culinary institute, by tricking his friends into taking home-ec with him and then entering the contest in secret.

He makes it to the finals hosted by — lo and behold — his culinary hero Bobby Flay! But — gasp — the finals are on the same day as the baseball championships, And his dad, friends, and older brothers are all jerks! What’s a confused adolescent boy to do? Well, he skips the competition and goes to the baseball game instead; his friends see how unhappy he is and tell him to go to the cook-off. His dad hears that he’s in the weeds because he showed up late and doesn’t have a parental sous chef like all the other kids, has a change of heart, and shows up to help. In a strange twist for Disney, Eddie loses, but Bobby Flay tells his dad he should have won, and we all learned something about accepting our children for who they are. Or something.

Check out a snippet of Bobby’s performance below.

Then there was his Law & Order: SVU cameo in which he (and Mark McGrath!) got roofied by a serial star-fucker and taken advantage of. Need we say more? If so, we did. If not, clutch your pearls, and check out the scandal below.

And, of course, we saved the best for last: Bobby’s cameo on the final season of Entourage, in which he woos Ari Gold’s estranged wife, to Ari Gold’s — shall we say, colorful? — dismay. Behold…

The priceless Declaration of War, in which Bobby in referred to as “a red-headed fire-crotch, a genetic mistake”:

The Confrontation (note the strong “talk to the hand” acting):

Keep that cameo machine fired up, Grillmaster. Just don’t forget to cook something every now and then.