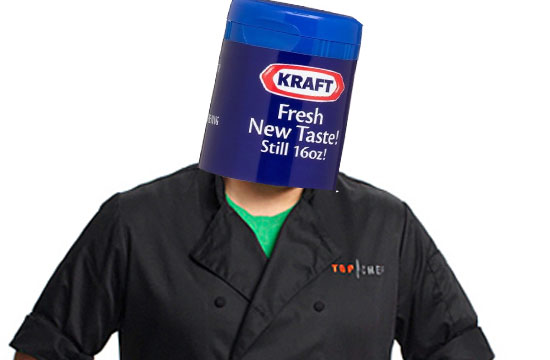 We’ve been trying to keep count of how many corporate sponsors Top Chef has that it’s become dizzying, but today, Bravo announced that it was going to find even more ways to work advertising into its lineup of shows. Now we’re positive that Bravo is trying to make our heads break. (Clean up your splattered brains with Pledge!)

In an interview with the New York Times’s Media Decoder, Dan Lovinger, executive vice president for cable ad sales at NBCUniversal, pointed out that the unscripted nature of Bravo’s reality lineup made it easier for them to work product placement into their programming — like, for instance, every car, cooking appliance, GLADware container, Whole Foods, canned food, Jonas brother, and prepackaged pasta product that ever appeared on Top Chef. (Making lists but can’t keep things in order? Use an Android!)

But now, they have advertisements that are living human beings:

Anderson Davis is not among the stars of Bravo series that the channel likes to call “Bravolebrities.” Nonetheless, he was treated like one on Monday night during an episode of “Watch What Happens Live”: he served as the bartender; joked with the host, Andy Cohen; and even took off his shirt to reveal a toned upper body that would not be out of place on one of Bravo’s “Real Housewives” shows.

Mr. Davis is an actor and model hired by the Kraft Foods Group and its advertising agency, Being Los Angeles, part of TBWA Worldwide, to play a character named the Zesty Guy in a new humorous campaign for Kraft dressings.

Whoa there. Bravo, what the flip are you doing?! It was awkward enough when you had cheftestants awkwardly making Deep Confessions while hovering around a Keurig coffee pot, but buying people’s identities seems…brilliant, in a really Orwellian way. (Once upon a time, The Zesty Guy had a name, but even he has forgotten it, and all he is known for is Being Handsome, and as he shook cocktails and pranced about shirtless, he knew the sponsorship was finished. He had made a crapload of dollars. He loved Kraft Foods.)

What if — and stick with us, people, this isn’t totally ridiculous — what if a corporation ended up buying the identity of a potential cheftestant and using him/her/it to advertise on Bravo? What if they hired an extremely talented chef who would win every Quickfire?

“We really enjoyed the delicacy of that salmon, Toyota Prius!”

“The winner of this Quickfire is…Samsung Mobile!”

“Clorox…please head back to the kitchen. Please pack your knives and go, Depends Adult Diapers.”

(Building an advertising Frankenstein to put on your network? Rob graves in luxury with the Lexus ES 350!)