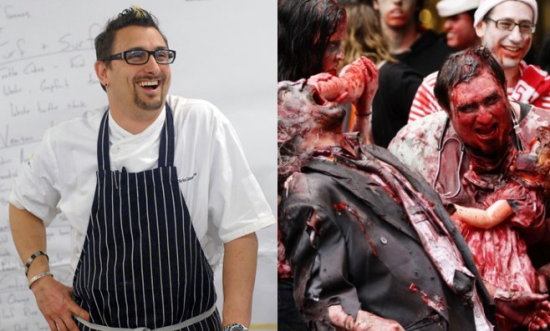 During an interview with The New Potato, Chris Cosentino blasts the entire enterprise of food television as condescending and uninformative — or, in his words, “fucked up and “candy coated.”

While he singles out Anthony Bourdain and Andrew Zimmern as hosts whose shows “delve into culture, a place, and a way of life,” everyone else — especially one Gordon Ramsay — drastically oversimplifies down the idea of home cooking and “treat[s] people like they’re stupid”.

“Some of the best chefs in the world just cook in their homes,” he pointed out. “That’s because maybe they don’t want to put up with the bullshit of working at a restaurant. On TV, you have Gordon Ramsay belittling people beyond what’s necessary and that’s not what it’s like in the restaurant world. Nobody does that. I’m sure I’ll get a nasty [insta]gram from him for saying that, but it’s true. It causes a negative stereotype about the restaurant kitchen.”

He continues to indict home cooking shows and the people who host them, but ultimately, he singles out the inane decisions made by network television executives as those ultimately to blame — with one particularly gruesome parallel:

People will watch zombies eat people on television but can’t watch an animal be harvested to be served as food. They’ll watch a gang movie where people are murdering each other but they can’t watch someone slaughter a turkey for Thanksgiving. Is that fucked up? Am I wrong? Where’s the disconnect here? Why is this happening? Isn’t Walking Dead the number one show right now? People keep telling me about it. And they say I’m fucked up because I serve organ meat?

People are watching zombies eat people, gangs murder one another and rape women, but they won’t watch the food process. That’s what’s fucked up about television. People don’t want to know where their food comes from and that is sad to me. Everyone wants things sugar coated and I don’t agree with that. Killing, eating human flesh, beating each other to death is natural on television but yet the food process is not. That’s why food TV is fucked up.