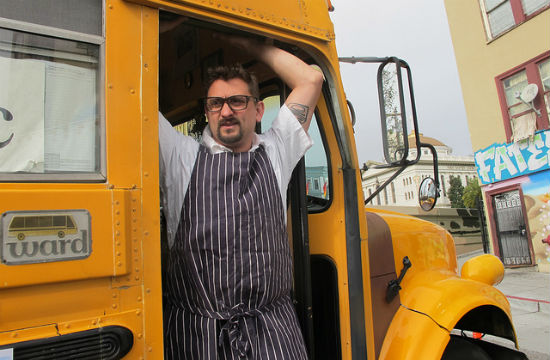 So we know offal expert Chris Cosentino used to bike race competitively in his spare time, but we didn’t know HE WAS A CRAZY PERSON. Because Chris isn’t your run-of-the-mill Tour de France guy. He bikes endurance races that we’re pretty sure would kill a man who didn’t eat pig hearts for a living. They’re like Spartan Races, but for cyclists. (And if you don’t know what Spartan Races are, then clearly you have never faced the desire to leap through walls of flame while running an obstacle course in an effort to act out a real-life Legends of the Hidden Temple.)

While Chris did eventually quit competing to focus on his career as a chef, he recently opened up about his most intense race ever: Montezuma’s Revenge in Keystone Summit, Colorado. It takes place on a closed course in which the competitors try to complete as many loops as possible in a 24-hour time period. Cosentino was the first person ever to finish it on a single speed bike. He told Food Republic:

“I did seven loops and equaled the gain, and descent, of the elevation of Mt. Everest. I crossed the Continental Divide seven times. At one point I climbed [the course] with a bike strapped to my back in the middle of the night. That’s part of the race. The course is unmarked and you have to find your own way and you have to be able to negotiate it all.”

“I’m climbing it with a pencil headlamp, you change into hiking shoes and put on an eternal frame pack and are charging up the mountain. The bike was about 20 pounds and, as you’re climbing up this mountain, all you can see are lights from other racers. So it’s a race to beat someone’s light. The trick is to shut off your light and climb to the top. That’s how I chose to race to the top. Then the sunlight comes up. There are mountain goats. Nobody will ever take that experience away. Never again will that opportunity happen.”

Did you slaughter and eat one of those mountain goats in the midst of a psychotic break, Chris? Because we probably would have and we don’t even like goat. As it turns out, Chris’s superfood of choice at the time was peanut butter and bacon sandwiches for a protein boost, and bananas to ease muscle cramps. Hmm, we’ll try next time we’re feeling pregnant and crampy. (That’s how that works, right?)

Anyway, Chris is the first to admit the race messed with him, confessing, “After I did Montezuma’s Revenge I was not a normal person for two months. I was destroyed.”

And now he serves dishes like “Leg of Beast” at Incanto. Behold: the psychological aftermath of intense physical trauma.