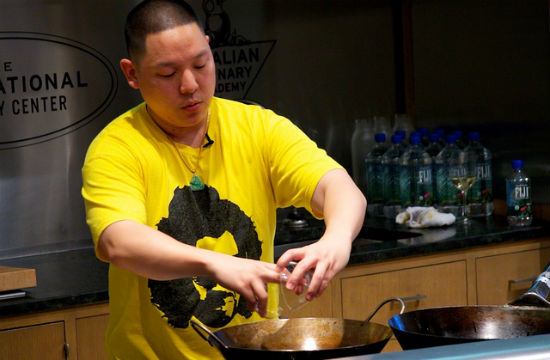 Make no mistake: Eddie Huang is a man who can dish it as well as take it. But he suggests a simple, open-minded approach to attending this weekend’s Brooklyn food festival The Great GoogaMooga. Gawker recently fired off a super cranky anti-foodie culture rant in response to a New York Times article claiming that food is the new music. (For the record, the post is very entertaining and we suggest you read it, if you’re mentally prepared to be told to fuck off a lot of times by the snark-bots at Gawker.)

Eddie Huang responded with a blog post of his own, after which The Daily Meal caught up with him for a comment, and he admitted there were points in the article with which he both aligned himself and disagreed. Mostly, though, he just hated that he was the Gawker cover photo in an article about “rock star chefs.”

“I don’t like it when people call me a gangsta chef, I don’t even like being called chef. I’m Eddie. I’m very fond of my name,” he said.

So what’s Eddie’s best advice if you’re super-stoked about attending GoogaMooga? Check your snark at the gates.

“I really like Pitchfork and Gawker a lot, but they have this superhuman ability to make anything great sound shitty,” he maligned. “I think GoogaMooga is one of those things, if you’re just going to go, enjoy food and enjoy the music. I really don’t think there’s anything to distill about it, not like the cultural food relevance and the timeline and history of food. Go eat good food and listen to music. It’s really that simple.”

And, when all else fails, marvel at the novelty of Pa LaFrieda roasting a whole 867-pound black angus steer. Because that’s happening at the festival. We’ll see you there! (Probably smelling like grill.)