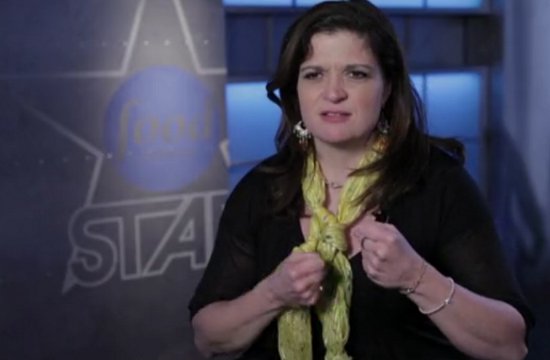 We just barely brought ourselves to watch Food Network Star last night after consuming various and sundry Memorial Day party dishes, but we soldiered through our food comas just for you. This week boasted the highly anticipated (for us, anyway) Chopped Challenge, in which contestants had to take on the dreaded mystery basket before Chopped judges Alex Guarnaschelli, Scott Conant, and Marc Murphy.

The challenge breaks down into three waves of competitions: Team Alton, Team Giada, and Team Bobby. Each team receives a Chopped basket with 4 mystery ingredients, and will have 30 minutes to create (dun dun DUN) a dessert. In this challenge, the teams will break down to face off against each other in an individual competition. And, to show personality, each person’s dish must have a “cooking tip” to share with the audience. Each team’s losing members will face off in the Producer’s Challenge, while the winners are showered with brownies. Psych. The winner doesn’t get anything. No one cares about winners.

Team Alton’s basket includes pancetta, kumquats, graham crackers, and the Swiss cheese of the chocolate world, Hershey’s Kisses. Because terrible waxy ingredients are delicious! Alton Brown lays a smackdown on Marty and tells her if she can’t talk and cook at the same time, STFU and cook. Justin embarks upon a crazy Kiss unwrapping technique that can only be fully appreciated by watching the episode (it involves melting them in the foil). He has truly earned a spot on Team Alton. Judson gives us his Fat Kid sob story to justify why he hates making desserts, but like, it’s okay, dude. All savory chefs hate desserts. “Retro rad” Emily tries desperately to churn out something that doesn’t taste like leftovers on a cupcake.

Emily nails her presentation and her food. Marty flails. Justin kicks all kinds of ass while scaring the bejeezus out of the judges during prep. Judson does slightly better with personality this week, while his fancy cake comes out underdone.

Team Giada is up next and we hope to God this individual challenge is the perfect excuse for Josh to stop riding his team’s coattails and get the boot. Ippy turns out some popcorn-topped tempura in a martini glass with their mystery ingredients: Reese’s Pieces, grape soda, coconut, and popcorn. Judges love it, in spite of the fact that hardcore, fast-paced cooking is not Ippy’s style. Martita forgets to share her cooking tip, but judges like the flavors on her Mexican dessert. Linkie nails her tip, presentation, and chocolate mousse, maintaining her dignity as a dessert queen. Josh bombs with a totally gross looking Danish donut/Asian nugget thing AND forgets to give a tip. Ivan makes decent bread pudding but his personality fizzles.

Team Bobby faces Hershey’s Milk Chocolate Bars (still gross), pineapple, pasta sheets, and black lava salt in their basket. Giada De Laurentiis possibly has a crush on Team Bobby member Michelle, so Justin has some company. All of Team Bobby’s dishes look beautiful, of course, as the restaurant crew. Michelle turns out a free-form Napoleon, but can’t get it together in front of Giada. Who has a crush on whom, again? Malcolm blahs his way through a Salt & Sugar Fried Pasta dessert. Eric nails a Hawaiian Napoleon. Nikki makes sloppy tropical bread pudding and delivers her presentation like an infomercial.

Team Alton wins even though there are no winners. Marty winds up on the bottom for his team. Josh (YES!) is on the bottom for Team Giada, and Team Bobby must offer Nikki up for the Producer’s Challenge — make a dish in honor of grilling season for those at home who don’t have access to a grill. Of course this challenge is right on Nikki’s Girl on Grill POV, while Josh continues to try and work his Asian/Danish flare. We do wish he would give it up. Marty shows off a tequila-lime marinated tuna made between two grill pans.

Marty’s bracelet snags during her presentation but she makes the accident adorable. Sadly, her tuna doesn’t have enough time to marinate and comes out bland. Use the marinade as a sauce, homegirl! That’s like, crappy chef trick #1. Josh is horrifically awkward and nervous but claims this was his most comfortable presentation yet, which is clearly a problem. Nikki wows with her hanger steak, so The Network ultimately deems her safe from elimination and she’s dismissed. After deliberation, Josh is cut for his lack of polish. In conclusion, today is The Best Day.

Now that Josh is gone, we can’t say we have much of a crusade against anyone else, so stay tuned to find out who we sink our teeth into next week.