Fresh Off The Boat Recap, Episode 4 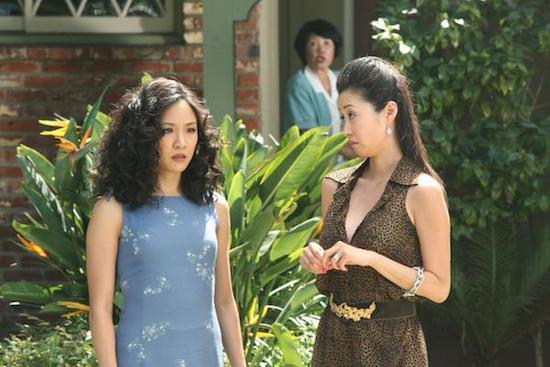 Should we take it to mean anything that ABC seems to be burning off the show with all these back-to-back airings? When there are only six total episodes airing seems like a move to say “Hey, we have diversity, but you just won’t watch it.” I’d say the show isn’t all that funny, but I’m not a network exec — what do I know?

The family is coming for a visit to the Eddie Huang household, and everyone wants to put on a good show so they won’t know they are really struggling. The parents decide the best way to show success is to putting out fancy soaps and fake lemon trees, having the kid sleep in the pantry and getting a perm. Because that’s what Asians equate with success, curly locks of hair! “They equate curls with dollar signs.” Kind of funny because I’ve seen it first-hand. Eddie is really psyched because he will get to hang with his cousin Justin, the one who introduced him to rap through N.W.A and turned him into “AWO — Asian with obsession.”

When they show up, Mom’s sister, Connie, has gotten new boobs. “They are so huge!” Mom says. “Yes,” says Connie, “I had to give up jogging.” “I can tell.” says Mom. She has all the best snarky aside; too bad there aren’t more of them. Then Connie’s husband Steve shows up in his new success perm too! Let’s all laugh, we’ve got boobs and curly hair. Also coming along for the ride is Mom and Connie’s mother, Eddie’s grandmother, who thinks Mom abandoned her. Now she is no longer the “favorite daughter.”

Eddie’s cousin has also changed. He’s no longer into rap, he’s into grunge, because he’s all “emotional” now. Bring on the flannel jokes! Eddie tries to get him listen to some rap but Justin says he’s not into Tupac. “He’s just a little immature. You wanna listen to some real grown-up music.” LOLZ. Then he puts on “Lightening Crashes” by Live, with which I totally have an issue. This was not real grunge. They were some Christian lite-grunge and this song was about the dangers of abortion. Seriously, was this the only song they could get licensed? Alice In Chains wasn’t available?

Meanwhile, the sisters begin to fight over their mother’s approval. What better way to do that than head to Tammy’s Hole for some discount shopping and show her which sister saves more money! I’m feeling tired — two shows in a row and I’m just not getting it.

Everyone heads to the restaurant where the sisters continue to try and impress mom with their fashion finds. They just keep running back and forth to the bathroom to change and regale their mom with their ever-increasing discount bargain finds. It’s a parade of ugly, inappropriate clothing from the ’90s. ’80s clothes are funnier, 90’s clothes are just sad. Still, what a fashion show to make everyone uncomfortable!

Eventually Mom and Dad own up and admit that the restaurant isn’t doing well and they are having financial trouble. The sisters then bond over the fact their mother is a cheapskate and being favorite daughter is very hard. I thought they would hug it out but even that is probably a bit too ABC Family for regular ABC — my bad, they just hugged. Dad also finds out Steve’s furniture store is struggling and they are also going through a rough financial patch. Money struggles really bring out the best in families don’t they? Dad and Steve also make up and handshake it out.

Eddie and Justin however, don’t work it out. Justin is just feeling too emotional, because grunge, and Eddie is still into his rap, which he decides to go listen to with his brothers, who seem terribly excited about this. Obviously, they’ve never listened to it before.

Another show and another lessoned learned in 23 ½ minutes. I think it was that we are not always all we seem to be. At least that is what the voiceover told me the lesson was. Two more episodes to go, I wonder what else I’ll learn.