Zoom Zoom: Guy Fieri Will Keep Drivers From Killing Themselves In Indy 500 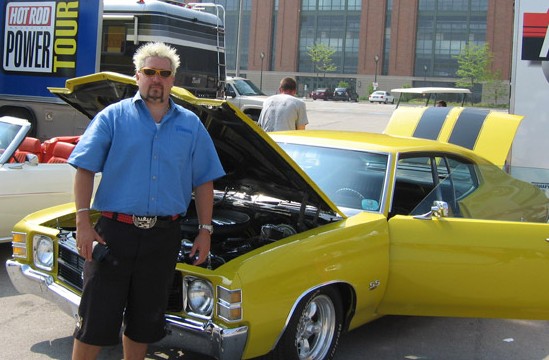 Guy Fieri, posing with his friend Bumblebee of the Autobots.

The organizers of the Indianapolis 500 announced yesterday that famous car-lover and Transformer with a spatula Guy Fieri will have the honor of driving the famous Pace Car at this year’s race.

What qualifies Fieri for this honor is that apart from his obvious celebrity, he apparently has a lot of cars, like the 2011 Chevrolet Camaro SS Convertible, 2007 Chevrolet Corvette, 1970 Chevrolet Chevelle SS 454, 1967Chevrolet C10 pickup, 2006 Chevrolet Kodiak C4500 4×4, 2006 Chevrolet Silverado 2500 and 2011 Cadillac Escalade ESV, and we have no idea what any of those things mean.

We also had no idea what the hell a pace car is, because we work in a loft in Soho and eat fancy grapes from Dean and Deluca all day. Apparently, it’s a car that leads the drivers in a few slow, unscored laps around the racetrack before the race starts, as a way to get cars warmed up, prevent racers from false starts, and help them accelerate faster when the race begins in proper. Of course, it’s become a very ceremonial position.  (It also gets used when there’s an accident on the track and the racers need to slow down while that’s fixed, but no one at Nascar would ever put Fieri in that kind of position.)

Being asked to drive the Indy 500 Pace Car is also an enormous honor in the auto world, too!  Guy Fieri joins a list of distinguished Pace Car drivers, such as Chuck Yeager, Jay Leno, Colin Powell, Lance Armstrong, Morgan Freeman, and sexy Patrick Dempsey.  If only Donald Trump hadn’t been a general blowhard and publicly mused about running for president last year, he’d be a distinguished guest of honor too.

Fieri is stoked and probably yelling a bunch of exciting things, yes?  “There are races and then there are races,” Fieri said in the press release. “And without a doubt, the Indy 500 is the race that I’ve always wanted to attend.” Okay, that works too.

Man, have we learned a lot about the Indy 500 today! Below we have pasted some of the details of the cars that Fieri will drive, and hope that you’ll appreciate them, because we still have no idea what any of this car stuff means.

The Corvette ZR1 that Fieri will drive at Indianapolis is powered by a supercharged, 6.2-liter LS9 engine generating 638 horsepower, helping to create incredible performance. It’s the fastest production car ever offered by General Motors, with a top speed of 205 mph. A six-speed, close-ratio manual transmission and dual-disc clutch apply that power smoothly, while Michelin Pilot Sport 2 tires mounted to 19-inch front and 20-inch wheels and specific suspension tuning provide more than 1g of cornering grip.