GOP Attempts to Fund FDA During Shutdown, Democrats Block It; We Live in Backwards-Land 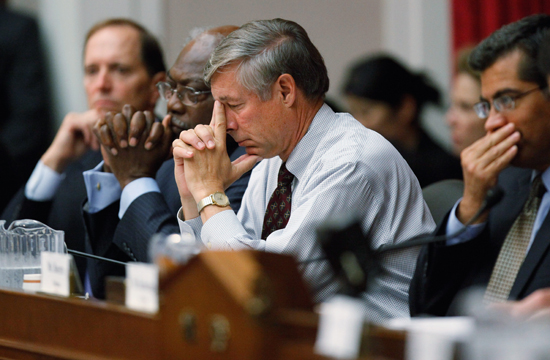 Yesterday, in a move that indicates that we have fallen into a parallel universe where black is white and night is day, Democrats in the House of Representatives were forced to argue against reinstating funding to the US Food and Drug Administration, the food safety organization shuttered by the Government Shutdown Hellmouth of 2013.

Even weirder: House Republicans, a group normally critical of the FDA’s “wasteful expenditures,” hammered to restore its funding.

As the Huffington Post and anyone with a brain noted, this move by the House is part of a “piecemeal” strategy to restore funding to several extremely popular, non-controversial federal initiatives. Curiously, everyone is pissed about these programs being closed: the National Parks Service, Veterans’ Affairs, and oh hey, organizations that impact food safety.

But at this point in the shutdown, anything that the Republicans like is verboten to the Democrats, and so this happened:

“Members on both sides of the aisle indeed understand and appreciate the important role of the FDA,” Rep. Fred Upton (R-Mich.) said. “This essential work should continue as we wait at the negotiating table for the president to join in a conversation to resolve our differences.”

Democrats argued against the bill even more vigorously, describing it as a political ploy, while doing rhetorical somersaults to emphasize their philosophical commitment to food safety.

“For years, we’ve been trying to get the Republican majority to be serious about the FDA and food safety funding,” she said, before noting that her Republican colleagues had voted several times to cut such funding.

“Now they are bringing up this disingenuous bill for political show,” DeLauro continued. “The health of American families is not a game. These are people’s lives.”

As ridiculous as it sounds to argue against bringing back the FDA, we’re gonna have to agree with the Democrats on this one: as we pointed out yesterday, the FDA’s food inspection service is only one factor in a complex ecosystem of federal food safety programs, and restoring one while ignoring the others (especially the Centers for Disease Control and Prevention, which so far no one’s attempted to bring back) smacks of opportunism, and seriously, what the hell, we’re arguing against restoring the FDA. (For the record, the “mini-bill” passed 235 to 162.)

We hate this shutdown — mostly because we’re now stuck in horrible rhetorical yoga knots that we can’t get out of. We don’t know what is right or wrong anymore. We just wanted to write about chefs.