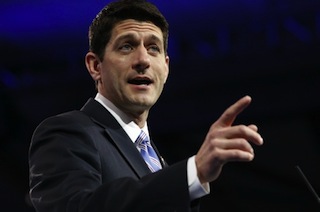 Representative Paul Ryan (R-WI) has been strangely silent on the government shutdown stalemate, especially since budgetary matters are allegedly his wheelhouse.

He spoke today. In an op-ed in the Wall Street Journal, Ryan proposed a deal to solve the government shutdown: trade sequestration-induced cuts for entitlement reforms:

All well and good, but Twitter immediately erupted over one crucial word missing from Ryan’s op-ed: ObamaCare.

Defunding the Affordable Care Act was ostensibly the reason Republican members of the House brought negotiations over a continuing resolution to an impasse in the first place, though House Speaker John Boehner (R-OH) has been inching the discussions away from ObamaCare as the debt ceiling has come into play.

Conservative reaction to Paul’s attempt to pivot the discussion to entitlement reform ran the gamut from confused to angry:

…and the New York Times’ conservative columnist picking the brain of the National Review’s Washington editor: