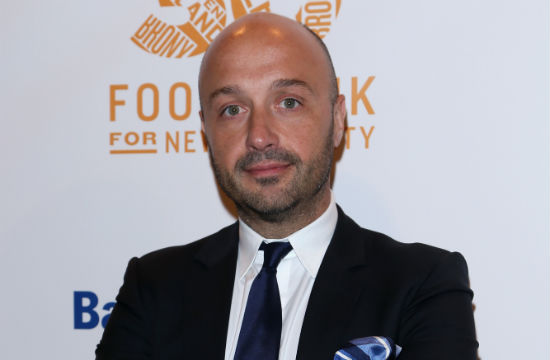 We caught up with iconic restaurateur and MasterChef judge Joe Bastianich at the New York City Wine & Food Festival this week, in anticipation of his teaming up with Progresso Artisan Soups at the Grand Tasting, for a long chat about how the Italian-American culinary landscape is unfolding in the “post-restaurant revolution.” From the soft spot he formed for MasterChef Season 5’s most volatile competitor Krissi Biasiello, to (his former employee) Mario Carbone and Rich Torrisi’s take on a vintage red sauce joint, Joe unpacked for us the culinary significance of Italian-American culture, which tends to clash with more high-brow forms of foodie-ism.

For that, plus more on his upcoming scripted TV series and a statement on the recent suicide of MasterChef Season 4 runner-up Josh Marks, check out our Q&A below.

The Braiser: So tell us about what you’re doing at the New York City Wine and Food Festival this year. You’re going to be at the Grand Tasting, right?

Joe Bastianich: Yup, and we’re going to do a pairing with Artisanal Progresso Soups and be at the stand and launch the message.

And then, this year, I’ll be a judge at the Burger Bash. I’ve been [to the NYCWFF before] as an exhibitor, when we were with Southern Wine and Spirits, in the Grand Tasting. But it’s been awhile since I’ve done anything. This will be the first year I’m kind of immersed in it.

Can you tell us about the upcoming scripted TV series based on your memoir Restaurant Man?

Yeah, it’s called Hungry, and it’s on USA Network. It’s the story of me opening my first restaurant, meeting Mario [Batali] and opening Babbo, and just kind of like a time and a place in New York, in the early ’90s, kind of prior to the restaurant revolution. You don’t remember New York in the early ’90s — it was a different kind of place than it is now — but I do. It was just a different kind of thing. It’s our story.

We’re still working on it. I’d like it to be, very much. Pre-cell phones, pre-Starbucks [a rep interjects: “Pre-Yelp?”, Joe chuckles] …Pre-Yelp. Pre-Internet. Pre-PCs. There might not have even been laptops in 1992…

Let’s talk a little bit about MasterChef. You recently lost a former cast member, Josh Marks. Any final thoughts on the story of his suicide?

It’s a tragedy. It was a shocking tragedy when we all heard about it. We’re all very sorry. We obviously spent four months with him, and then time afterwards. And when you get to know somebody with that kind of potential and talent, and just good humor he had as a person, it’s very sad to hear when that happens.

On the most recent season that aired, you seemed to take a particular shine to contestant Krissi [Biasiello].

Yeah, I had a soft spot for her.

You know, she just got her own radio show.

I read that on your website. I was incredulous.

So what is it that drew you to her? She wasn’t exactly a fan favorite.

No, I think that, for the show to be successful, you need to have the people who people love to hate, as well, and she’s certainly not, as we would say in Italian, sympatica. But she’s a real character, and she’s really part of the Italian-American landscape that coats this country, and I think she represents it in a real way. I just like the realness of her. Her situation may not be the best, she may not be the most eloquent person, but she could cook, and she had a repertoire of recipes that represented who she was.

There was a very strong Italian-American theme. It’s something that I really like. As much as I’m Italian — I always try to explain to Italians that Italian-America is a completely different thing that has nothing to do with Italy. And I like that culture. It’s the culture that my wife and my wife’s family come from, and I grew up in a little bit, and I think [Krissi] represents a part of that. And I like that.

It’s kind of funny, because the reason why I [teamed up with Progresso] fits into — it’s not far from the Krissi question, in the sense that like, I grew up in New York in the ’70s and Italian-American culture was always part of what we did, and Progresso was a brand that was always around our house growing up. My grandmother would use their canned beans and stuff like that to make her own soups. So when they came out with this Artisan line of soups, we tasted them, and I thought they were really good. And I thought it would be a story that I could honestly tell.

I like the product, I like the story, I like the history, you know, the Italian-American culture that comes along with it. It’s a real Italian-American success story, the Progresso brand, for 100 years in The States. I think the product’s really good. I think the world that we live in, the very egalitarian foodie-ism, there’s something about product like this — it’s homey, made with real ingredients, it’s accessible to a lot of people — that I think is worthy of mentioning and of talking about.

We keep coming back to the Italian-American question. What do you think of a concept like Carbone?

Pete Wells’ one critique of the theatrical element was that they don’t have any women working as Captains.

I don’t even know if that’s legal.

I’m sure they’ll be defending some lawsuits [chuckles]. Well, the guys [on the waitstaff] are great. For me, the best part of the experience was the waiter. It was this guy, his name was Joey, from Yonkers, totally like, out of central casting. It was great. He knew his shit, he was a great waiter, he sold us a lot of food, way more than we could eat. We had a nice time.

Well, sure, it challenges the motif, but the point still stands that there aren’t any women.

When you’re paying $42 for a plate of scungilli, do you want a woman to serve you?

…Well, that’s the quote of the interview right there. I can go. We can wrap it up. I’m all set.

You can’t print that. That’s a sarcastic reference. I think that’s what they’re going for.

Obviously it works. It’s the hottest ticket in town. So maybe not many people care about having women serve you. I just don’t know, technically, if you can do that. In this day and age, can you say, “We’re hiring, but we’re only hiring men”?

I’m sure they can’t say that. But they are only hiring men.

But then there’s consequences to that. It becomes apparent, then, that it’s not legal.

I think that their take on Italian-American is really — I mean, their food quality is so high, they’re great cooks, and what they do translates. They take a cuisine that has usually been associated with poor quality ingredients and poor quality cookery and elevated it to as good as it can be, and I think there’s obviously a huge appetite for eating that kind of food. You know, people want to eat chicken marsala, and they want to eat veal chop pizzaiola, and they want to eat lobster fra diavolo. That’s the kind of food people like.