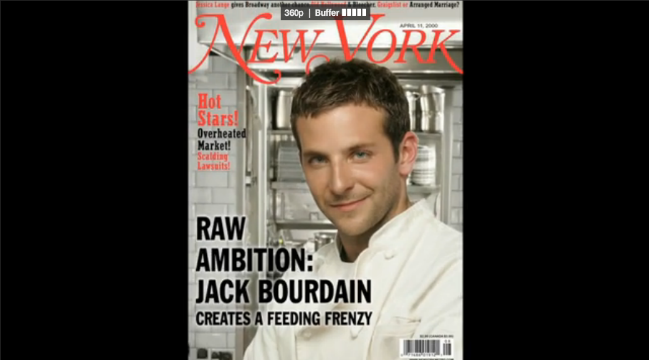 As you may or may not know, we here at The Braiser are taking a trip down memory lane and offering a weekly recap of the one-season wonder Kitchen Confidential. With Bradley Cooper on board as Anthony Bourdain‘s adapted hero Jack, you’re in for a wild ride. So, without further ado, here’s our recap of the (surprisingly solid) pilot, “Exile on Mainstreet”. (Scroll down for the video.)

From the very first moment, we see Bradley Cooper wickedly gazing and crookedly smiling up at us from a faux New York Magazine cover as Jack Bourdain, with the headline “Raw Ambition: Jack Bourdain Creates a Feeding Frenzy.” Throw in a confident voiceover from the series lead about how he was born to cook and a jazzy score and, thus, we are thrust into the world of Kitchen Confidential.

After a quick montage illustrating the various ways in which our protagonist “indulged” in the kitchen pre-sobriety, we discover he’s now working at —- quelle horreur! —- an Italian theme restaurant, complete with opera-singing waiters, menu items such as “ninja pizza explosion,” and little Italian flags stuck into the rigatoni, presumably meant to serve as some desperate declaration of authenticity. Such is Jack’s fall from critical acclaim.

Back at his (unrealistically sumptuous for a New York City chef) apartment, among answering machine messages from his AA sponsor and credit card collectors, Jack gets an intriguing voice mail from a restaurant called Nolita, referencing the resume he sent and asking him in for an interview. Quoi?! Jack doesn’t have a resume, silly! He initially dismisses the message as a hoax, but his squeeze-of-the-week (slash boss-lady) suggests he go as she saunters out of his shower. And, so, Jack meets up with restaurant owner Pino (Frank Langella). After a falling out with the previous head chef, Pino wants to reopen his restaurant in 48 hours with no kitchen staff. “A suicide mission,” by Jack’s account. What better bone to throw a chef who has been blacklisted? He takes it.

So, Jack embarks upon the mission of staffing his kitchen via a series of empty promises. To Seth Richman (Nicholas Brendon), pastry chef, he offers dental insurance. To Teddy Wong (John Cho), seafood master, he offers visas for all his illegal, sushi-slinging brethren. To Steven Daedalus (Owain Yeoman), potential sous chef and master thief, he simply shows off Nolita’s decadent dining room, and he’s in, if, for no other reason, than to nick the undoubtedly very expensive salt and pepper shakers. Stop right there, Steven. Jack chastises his old friend and reminds him that everything is going to be by the books this time around. Bradley Cooper is heartwarming as the wannabe good guy, no?

An unexpected addition to the kitchen is Utah born-and-bred rookie chef Jim (John Francis Daley), whose bumbling entrance involves a fundamental misunderstanding of how to carry an opened 20-pound sack of onions. He’ll learn. Jack agrees to let him stay, essentially for the entertainment value, while Steven lights up at the thought of tenderizing the fresh meat.

Kitchen service is underway for Nolita’s inaugural meal under a new chef. Jack is kicking culinary ass and taking names, tossing Jim’s sub-par tartar in the trash and assaulting the waitstaff with a whole sea bass named Greg, who will later become the night’s special (garnished with crispy leeks, FYI). Everyone’s heart goes pitter-patter at his rousing, domineering, slightly scary speech. We, like token sassy gay waiter Cameron (Sam Pancake), are like, so in love right now.

But, we can’t have a pilot episode without some drama. The first domino to fall is Jack’s former love interest (and food critic) Reese Ryder making a rez for the reopening. Of course, Jackie may or may not have pissed off his ex-lady when she caught him nailing her sister, but we’re sure that won’t affect the review at all.

Domino 2: Pino’s apparent lover and head waitress Mimi (Bonnie Somerville) — later discovered to be Pino’s daughter, not mistress… ew — pulls rank on Jack behind his back and changes the menu. He tries to show her who’s boss, which results in a little back alley anxiety-vomit. No biggie.

Domino 3: Reese accidentally pisses off Mimi at the hostess stand, which, admittedly, isn’t difficult to do since she’s pretty much a general wash of bitch, and subsequently gets the worst table and service, despite Jack’s specific instruction that she get the red carpet treatment to butter her up come review publishing time.

A drunk, Cosmo-swilling hoard of biddies celebrating an engagement sends a pair of undies back to chef in an effort to coax him out of the kitchen for drinks. Jack obliges (but maintains sobriety). Meanwhile, back in the kitchen, Jim finally stands up for himself to his tormentors and this somehow results in Steven’s fingertip getting sliced off and lost somewhere in the kitchen. Cue the predictable onslaught of plate-pulling in search of the missing digit, which is, lo and behold, located beneath Reese’s sea bass and crispy leeks. Mimi manages to pull it before she notices.

Service is finally over, which finds Jack doffing his chef’s jacket in the walk-in, and who should stumble across him but the Cosmo-soaked engaged chick, trolling for one last romp before “I do.” Jack resists but not before being walked in on in a compromising position by both Reese and his girlfriend Suze. Cooper’s best acting is saved for the last five minutes of the episode, where he flippantly cops to having a threesome with Reese and the passed-out-chick after getting busted by Suze, instead of the usual “wait, wait, let me explain” shtick. The moment crackles with critical potential.

The rest of the kitchen and waitstaff hang out drinking after hours, waiting for their first review to come out in the wee hours of the morning (you know, as restaurant staffs are wont to do). Final verdict? Service was a mess, but food was sublime. Promising! Everyone goes out to celebrate, but Jack returns home with roses and champagne for Suze (who relented and agreed that the walk-in incident wasn’t what it looked like). But she’s nowhere to be found. Instead, on the table, there is only a copy of the review, a stack of Jack’s resumes, and a note of congratulations, explaining that she sent out his CV to Pino, but couldn’t wait around for the possible relapse trainwreck that would come with another successful restaurant. Believable? Perhaps not, but there’s lots of Bradley acting expressively beneath the letter-reading voiceover to make up for it. Where to, now, Jack? (Answer: to the stars.)

Stay tuned next week for single Jack’s post-opening adventures. (Did Steven’s finger ever get sewn back on? It’s unclear.)