Last Call: Here’s Why We Cried At Work Today 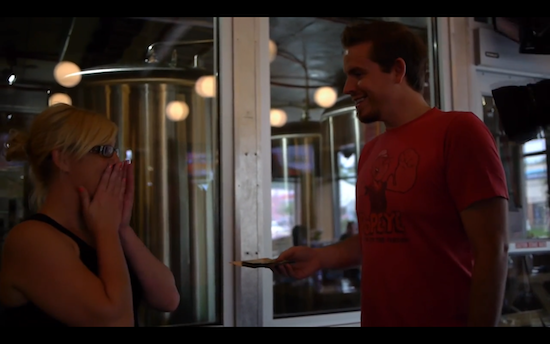 Eater: In potentially the best dying wish we’ve ever heard of, the late Aaron Collins requested that his family, “leave an awesome tip (and I don’t mean 25%. I mean $500 on a f***ing pizza) for a waiter or waitress.” Their first tip-giving went viral and the family responded by accepting donations to bring Aaron’s tips to to all 50 states. Here’s a video of a waitress getting one such awesome tip. Meanwhile, The Braiser has turned into Broadcast News.

The New York Times: In a profile of NoMad’s overnight baker Diana Bush, we learn possibly the scariest thing ever about pretzels: “Pretzels can be finicky,” she says. “we immerse them for a few seconds in hot lye, which gives their crust color and shine. I wear latex gloves for protection.”

Food & Wine: Self-proclaimed “meat-sot” and “public hater of vegetables”, Josh Ozersky has espoused the virtues of vegetable-heavy menus and the brazen chefs who pull them off. It’s a great read, even if it does make our brains hurt.

America’s Test Kitchen: Next time you can’t find a measuring cup or ice-cream sprinkle distributor, you can make one out of a used yogurt container. Because that’s easier than looking harder, or sprinkling sprinkles with your hands.

Huffington Post: If there’s a hole in your heart and cookbook shelf left by caricature of Southern cooking, Paula Deen, here’s a respectable non-racist, non-butter addicted Southern lady chef to look to instead.

Grubstreet: A movie we don’t want to see is being cross-promoted on a show we can’t stand to watch. Grubstreet has all the deets, including a terrifying Photoshop job of Guy Fieri’s face on Adam Sandler’s body (spoiler alert: it’s an Adam Sandler movie and Guy Fieri’s show).