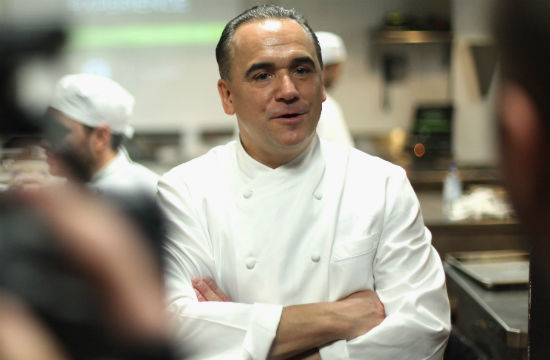 New York Post: Jean-Georges Vongerichten lives above his restaurant Perry St. in a shmancy glass tower residence that also houses Calvin Klein. Unfortunately, due to a combination of Hurricane Sandy flooding and Perry St.’s grease traps overflowing during the storm, the entire building’s electrical system has shorted out. Residents will reportedly be displaced for the next six months while repairs are made, but Vongerichten hopes to reopen Perry in two months. We don’t even want to know what a basement kitchen looks like after grease traps have overflowed inside it.

Fresh Off the Boat: Eddie Huang has been named a 2013 TED Fellow. As Eddie’s blog put it, “Fellows up, hos down.”

Huffington Post: A long, long time ago, before the Diplomatic Chefs Corps was even a twinkle in Hillary Clinton’s eye, Julia Child was the original diplomacy chef, according to her godson Henry Breed, UN General Assembly political adviser. Well, of course she was. Is there anything Julia didn’t do first?

New York Times: After two and a half years of legal struggle, the BLT divorce between the empire’s chef Laurent Tourondel and restaurateur Jimmy Haber is final — just in time for ESquared Hospitality pastry chef Julie Elkind to step into the limelight on Todd English’s upcoming E! reality show!

Vice: In the latest episode of Vice Channel’s Munchies, Jonathan Benno takes us through his Lincoln Ristorante kitchen, which is completely open and in full view of the diners. This, we imagine, means no yelling, no swearing, and no surreptitious bumps on the line.

Gawker: This Ukranian 9-year old spent his family’s life savings, which he knew they kept hidden under the couch in various currencies, on candy. There was a questionably mentally ill adult credited as a possible accomplice, but police say there’s no way the family can get its money back. Is this unfortunate or amazing? It’s becoming increasingly difficult to discern between the two here at The Braiser…