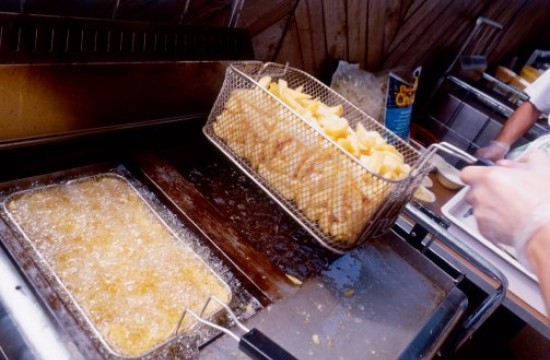 Daily Beast: Two men in Janesville, WI. were arrested early Wednesday morning from stealing over 1,000 pounds of grease from a local Wendy’s, possibly to sell as biofuel. Janesville is also home to GOP vice presidential candidate Paul Ryan, and the Daily Beast notes with some sadness that “grease stealing likely won’t get a mention” in tonight’s debate, unless Ryan has used it to shine his curl-bulged biceps.

Twitter: Sam Sifton says that “foodie” is not a word, and since he is a Fancy Editor at the Even Fancier New York Times, he probably knows what’s up with things like “words” and “definitions.” Everyone else on Twitter does not agree. (Especially conservative commentator John Podhoretz, who is unusually restrained in snottiness.)

Gawker: A Perth man claims that he was kicked out of a bar for sporting a long mullet. He claims that he wasn’t causing trouble, but that the bar’s management told him they didn’t want his “type” there. (In fairness, the bar may have been surprised that someone was wearing a mullet in 2012 and thought that he was either a homicidal recluse, or a violent time traveler.)

The Daily Meal: An artist recreates Mark Rothko paintings using rice. We challenge him to go even further in self-reference and make a Warhol soup can out of soup cans, or a Damien Hirst shark out of even tinier sharks.

The Christian Science Monitor: Speaking of Wendy’s! The chain’s logo got its first makeover in nearly 30 years, and the Wendy’s girl, can we say…kind of looks like a hipster. Seriously, slap some big ol’ glasses on her, and she’ll probably start telling you how she drank Frosties before they were cool.