OMG There Is A Museum Dedicated To White House Chefs 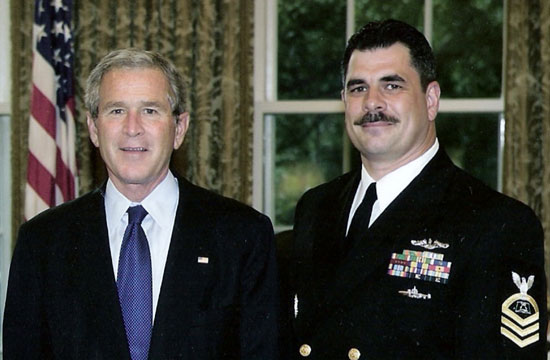 Do you like food? Do you like America’s executive branch? Politics/food dorks rejoice, because there’s a museum out there that combines both of those things. We know! We, too, are super stoked! The Presidential Culinary Museum is a real museum that really exists in Grover, North Carolina (which is also named after our 22nd and 24th president, Grover Cleveland), so oh boy oh boy, get super excited about this upcoming event with George W. Bush’s personal barbecue chef, Sam Morgante.

Thanks to The Atlantic’s Garance Franke-Ruta, we are now aware of where the legacies of current White House chefs Sam Kass and Cris Comeford will go after Obama’s second term: to the Presidental Culinary Museum, full of illuminating talks like the one that Morgante delivered yesterday about his time making the president’s Texas-style ribs (grammar unedited, because that’s how the Presidential Culinary Museum rolls):

Morgante worked a 20 year US Navy career to the bone to get to the White House Military Office.  Retiring in 2005, some say he slathered it with BBQ rub also.  They are correct — he did it underwater, in the air and everywhere ordered.  The once a month special, Texas-style BBQ, was mixed up for the President no matter the time nor place.  “Like the movie, The Butler, coming out this month,” The Chef explains, “you learn how to serve the most important guest a cook could ever have and you perform your magic in Japan, Canada, or anywhere you find yourself.”

Yes, his life is exactly like the upcoming Forrest Whittaker movie The Butler, only with more neoconservatives and less Oprah Winfrey. Also, Oprah Winfrey has never accepted money from Heroes Vodka, the only vodka made by a former US Marine whose profits go towards helping disabled veterans and not towards oppressing homosexuals.

RELATED:
Here’s Why Ranking On D.C.’s 50 Most Beautiful People List Is An Insult To Sam Kass
Not Even White House Personal Chef Sam Kass Can Escape Government Furloughs
WATCH: Ming Tsai And Cris Comeford Asian Up The USDA’s Nutrition Recommendations