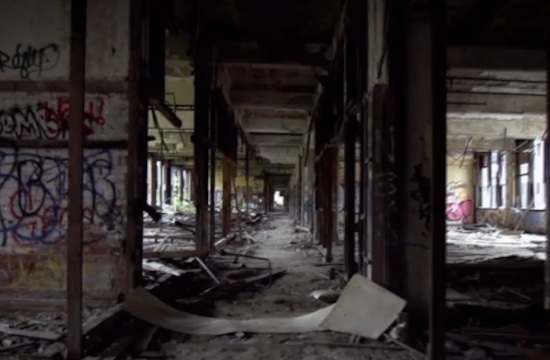 No one knows how to go out with a bang more than Anthony Bourdain. And instead of tackling more sex scenes in Tokyo (or maybe seal hunting in Canada), Bourdain takes on the ruins of an American city, Detroit, in the season finale of Parts Unknown.

And it does feel slightly voyeuristic, watching Bourdain climb up the steps to the abandoned Packard Auto Plant with the sole resident, Al Hill. It’s Hill who says it best: “It takes a whole village to raise an individual, and it takes the whole world to support one city. And when one city is suffering, or when a community is suffering, the entire world should help pitch in and help elevate it.”

Bourdain is the first to admit, via his Tumblr, that he’s indulgent in gawking at Detroit:

But there was no turning away. It’s there—everywhere you look, right in your face, taking up skyline, dead center: the things that were left after Everything Went Terribly Wrong.

But still, Bourdain maintains that the show isn’t really about what went wrong — it’s about celebrating who’s doing it right.

So, this show is not about what went wrong. Or how bad things are. It’s about improvisers. About what it takes to dig in and stay. I hope, that even among ruins, audiences will see what I see: an extraordinarily beautiful city—unlike any other in America—still. It’s where so many of our uniquely American hopes and dreams were forged—the things that make us who we are: the automobile, the highway—the dream of mobility— for ALL Americans. Credit. Music. It’s where the American Dream was created. And it’s STILL the American Dream—if a different one that we are, all of us, together, sooner or later, going to have to figure out.

At least Bourdain gets to eat some barbecue and mac n’ cheese for comfort food while there. Check out Bourdain’s version of Detroit tonight on Parts Unknown.