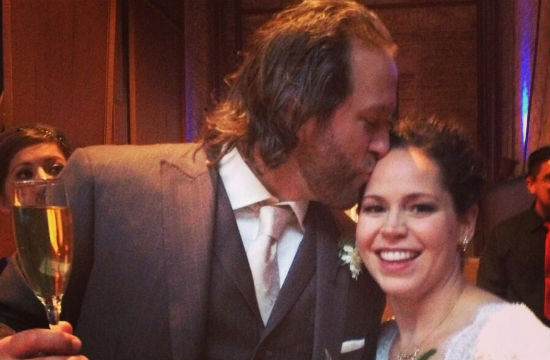 First Lady Top Chef winner and Girl and the Goat chef/owner Stephanie Izard got married over the weekend; yes, she looked so beautiful, it hurts; yes, the wedding was so twee that your own will seem wildly inadequate at worst and badly wanting of adorableness at best. (To wit: she married a guy named Gary Valentine…)

Luckily, much of the wedding party had the wherewithal to tweet the experience, so that we can all share in the warm fuzzies. Without further ado:

Look at that rooftop!

Look at that chalk art!

Look at that drunk loved one!

Look at those snacks!

LOOK AT THAT GROOM’S CAKE.

Our wedding beer in a tiny cask or @ChicagoCousin grooms cake??!! pic.twitter.com/4JAruI4rz7

Thank you to all of our talented friends that helped make last night perfect! pic.twitter.com/d2ismtWh7c

People Magazine managed to snag some photos of their (obviously adorable) wedding cake here, which was comprised of one layer of strawberry Nesquick and chocolate marble with a bacon buttercream frosting, and one layer of Cheez-It cake with chocolate ganache, peanut butter and chocolate-covered Cheez-Its. Paging Christina Tosi. Steal this now.