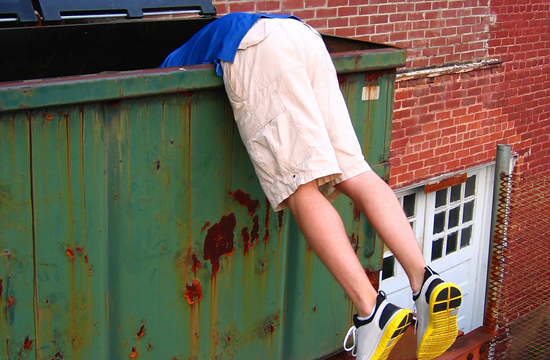 Have we reached that point, America? The point where cronuts turn into the meth of the pastry world (the crank-nut)? Where people sacrifice time and dignity to get their hands on the fried stuff? Where people  knock off the cronut as a substitute for The Real Thing? Where normal human beings, addicted to the 99% pure pastry madness, dig through the trash of Dominique “Heisenberg” Ansel to get their hit?

Apparently, yes, according to the Gothamist, who got their hands on a photo of two women rummaging through what is obviously a trash bag behind the famed pastry shop, like two addicts who, swear to Jeebus, think there’s one more rock in the bottom of that Solo cup:

The tipster who sent us this photo witnessed this all go down last night outside of Dominique Ansel Bakery, telling us that “it wasn’t even a finished Cronut… it was burnt and unfilled.” The bakery never has Cronuts to toss out at the end of the day, so this was just a casualty from the frying process. Our tipster added, “It was a really sad moment. One of the cooks ran out and told them it was unsafe to eat, and they cursed at her and ran away.”

Cronuts are whack, yo.