Andrew Yang Re-Ups His $1,000 a Month UBI Plan Amid Coronavirus Crisis: ‘Pass It and You Look Like a Hero’ 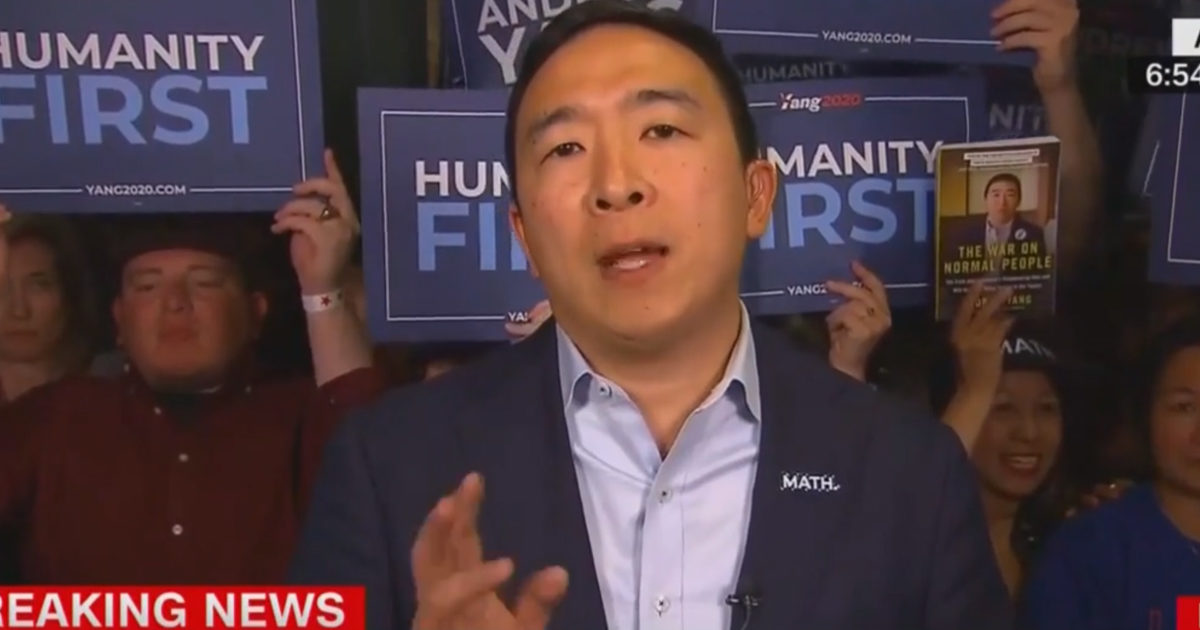 Former 2020 Democratic candidate Andrew Yang reiterated a call for his universal basic income, which was a key part of his presidential run, to deal with the massive economic shock the COVID-19 crisis will have on everyday Americans.

In an interview with The Atlantic, Yang noted that the CDC had just advised an eight-week moratorium on any large gatherings, which has led to many states effectively grinding their economies to a halt through travel curfews and social distancing measures.

“You’re looking at, essentially, a negation of a significant proportion of our economic activity,” Yang noted. “There’s really no effective way you can try and make workers whole that does not involve putting money into everyone’s hands.”

“We don’t know if the world’s going to reopen in eight weeks,” Yang added. “It’s unclear what data we would have that would enable the CDC or other policymakers to give us the ‘all clear.’ So it should be $1,000 a month until this crisis is over. And obviously anyone who knows anything about me knows I think it should then just continue in perpetuity.”

He’s not alone in pushing for a direct federal government stimulus for citizens. On Monday, Utah Republican Senator Mitt Romney endorsed sending a $1,000 check to every adult American to alleviate lost income and other unexpected costs associated with the economic downturn from the pandemic.

“This is one thing I find ridiculous and frustrating when politicians talk about making people whole. It’s like, how do you make a parking attendant who just lost all of his shifts whole? You know, he’s not paying a payroll tax now,” Yang pointed out. He went on to express optimism that his UBI policy was gaining more mainstream support.

“I’m getting more and more encouraged,” Yang explained. “Because if you look, you see a range of economists from Jason Furman and Nouriel Roubini coming out for it. Commentators from [MSNBC political analyst] Anand Giridharadas to [Fox News contributor] Geraldo Rivera. And now with Mitt Romney coming out, you have Republicans as well as folks like [Reps. Alexandria Ocasio-Cortez] and Ro Khanna.”

“It’s common sense,” Yang argued. “Politicians are quickly realizing it. And one reason I’m optimistic that it’s going to pass is: What is the political downside to giving everyone cash? I don’t see it. It’s like, you pass it and you look like a hero; you don’t pass it, you’re a moron. Even members of Congress can see that calculation.”