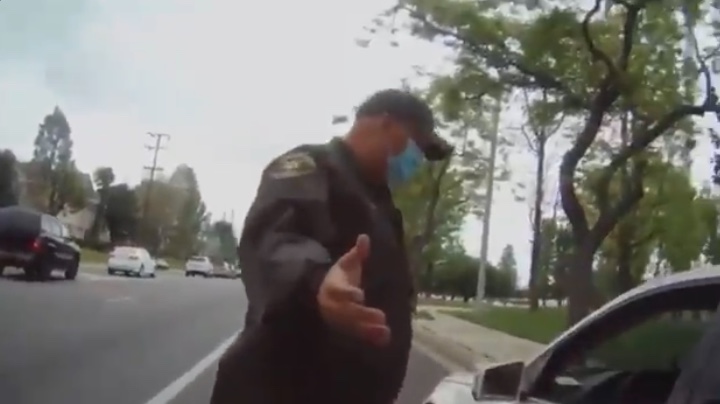 Body camera footage from a Los Angeles County Sheriff’s Department deputy captured an interaction with a motorist who repeatedly told the officer, who is Latino, that he’s a “murderer.” The footage was posted by Fox News’ Bill Melugin, who says he has identified the woman in the exchange but is choosing not to release her name at the moment.

The ugly incident happened in San Dimas, CA on April 23 (assuming the body camera’s time stamp is accurate) when a deputy pulled over a motorist for allegedly using her cell phone while driving, which is against the law. As the officer approaches the vehicle, the driver says she was going under the speed limit, which he acknowledges and tells her that wasn’t the issue. “I pulled you over because–”

“You’re a murderer,” she interrupts while also recording him. Later, in true Karen fashion she asks, “And can you call your supervisor, please?”

NEW: “You’re always gonna be a Mexican, you’ll never be white, you know that?”
A Latino LASD deputy sent me his bodycam video of a woman claiming to be a teacher launching into a racist tirade against him when he pulled her over in San Dimas. She repeatedly calls him a murderer. pic.twitter.com/Cc8jSVenCQ

The motorist accuses the deputy of “harassing” her, telling him, “You scared me and made me think you were going to murder me.”

“Well that’s not just a feeling. You’re a murderer.”

Later she says, “I’m perfectly legal and I’m a teacher.”

She later claims, “You’re threatening to kill me and my son,” who apparently is also in the car during the stop.

The deputy asks if the car she’s driving is hers.

“Yes it is. You’re trying to say I stole my own car because you’re jealous? Is that what that’s about?”

The deputy’s supervisor arrives and informs the woman she’s being cited only for using her phone while driving.

Supervisor: All you need to do is just get your signature. He’s only citing you for using your cellphone while you’re driving, that’s it.

Motorist: For him being a Mexican racist? What is that name?…

Deputy: [Handing her the citation] There you go, dear.

Motorist: You wanna be white.

Deputy: Have a good day.

Motorist: You wanna be white so bad.

Throughout the exchange the deputy remains remarkably stolid. Melugin said on Twitter that Los Angeles County Sheriff Alex Villanueva told him that he’s “proud of his deputy for staying calm and professional during this interaction.” Melugin also notes that the San Dimas station of the L.A. County Sheriff’s Department doesn’t officially have body cameras yet, but this deputy invested in one for himself.

As for the motorist, Melugin reports she has been a professor at Los Angeles-area schools and that she has a history of filing complaints against officers. This time was no different. After the stop, she called the Sheriff’s Department to file a harassment complaint against the deputy.