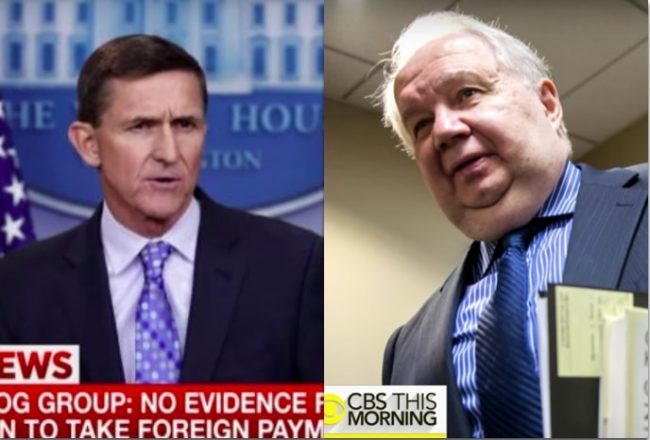 During those conversations, Flynn at several points urged Kislyak to tamp down or limit to “reciprocal” any official Russian response to the newly-emplaced sanctions the Obama White House had put in place over Russian interference in the 2016 election. A Washington Post exposé in February 2017, based on a leak from an anonymous government officials, revealed that Flynn had denied discussing sanctions with the Russians. In the ensuing outrage sparked by the Post story, Flynn was fired by Trump for lying to Vice President Mike Pence about his actions. An FBI counterespionage probe questioned Flynn about the conversations, and he was ultimately charged with lying to investigators. Flynn twice pleaded guilty in court to lying to the FBI, but earlier this year sought to recant his plea. In a highly controversial move, Attorney General Bill Barr recently directed federal prosecutors to abandon the case, but the judge has yet to officially dismiss the charge.

The declassified transcripts of the calls between Flynn and Kislyak were released by Sen. Chuck Grassley (R-IA), chairman of the Senate Finance Committee.

In the calls, Flynn and Kislyak can be seen feeling each other out, trying to find common ground. But Flynn clearly communicates that he is asking for patience from the Russian diplomat for the incoming Trump administration. And his entreaties evoked comments made in 2012 by then-President Barack Obama to then-Russian President Dmitry Medvedev, where Obama said he would have “more flexibility” to deal with a foreign policy issue after the 2012 election.

“Please make sure that its uh — the idea is, be — if you, if you have to do something, do something on a reciprocal basis, meaning you know, on a sort of an even basis. Then that, then that is a good message and we’ll understand that message [emphasis in original],” Flynn told Kislyak. “And, and then, we know that we’re not going to escalate this thing.”

“And then what we can do is,” Flynn said, moments later. “When we come in, we can then have a better conversation about where, where we’re gonna go, us, regarding u, regarding our relationship.”