Draining the Cabinet: Alex Acosta is the Latest Official to Leave an Administration With Historic Turnover 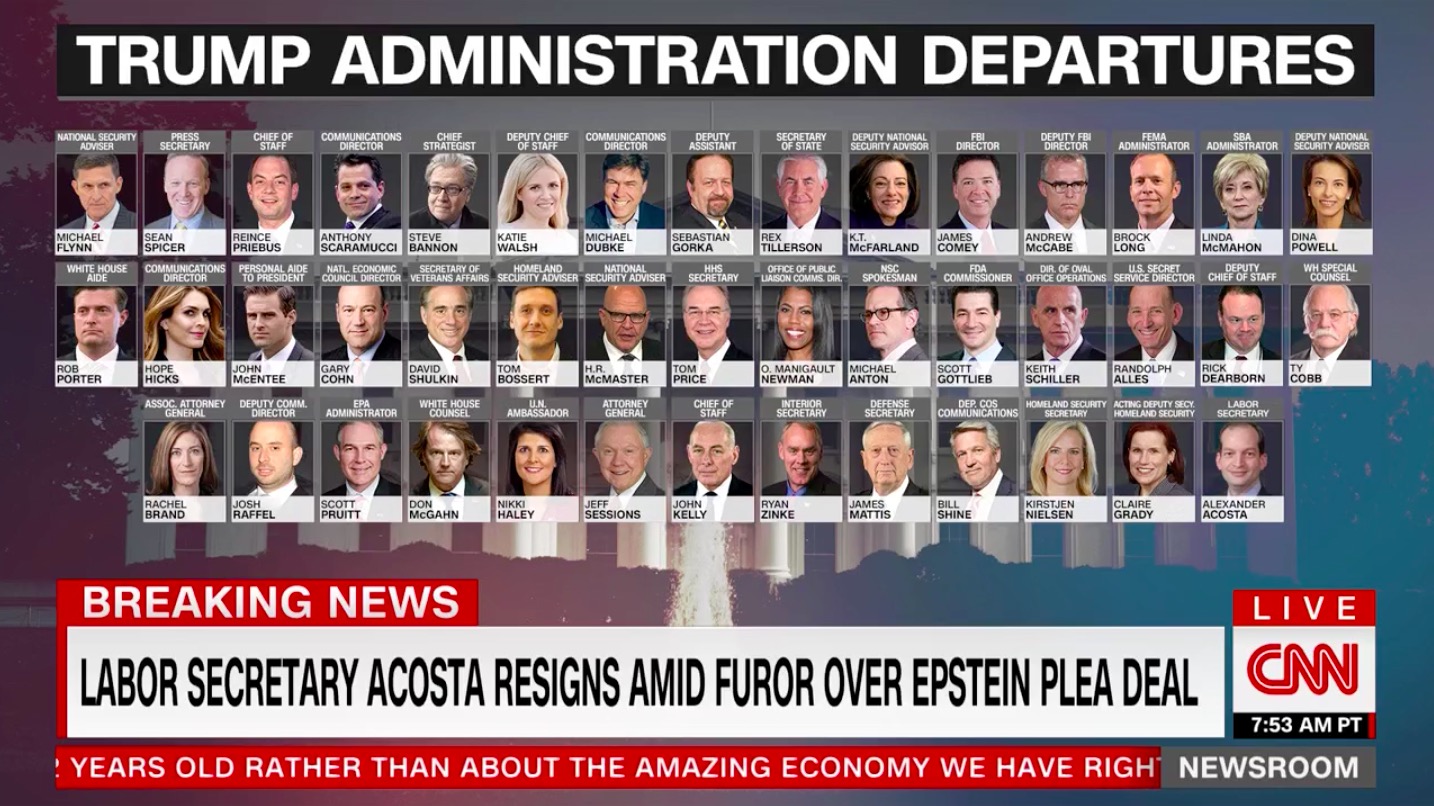 President Donald Trump’s administration has been defined by historic turnover. The resignation of Labor Secretary Alex Acosta, announced Friday as the former U.S. attorney faces intense scrutiny over his work granting a wealthy registered pedophile a lenient plea deal in 2008, adds to the jaw-dropping tally of departures.

Granted, the third year of the Trump presidency might seem calmer than the first two, which were rocked with weekly scandals ranging from the prodigious ethical violations of EPA chief Scott Pruitt (resigned) to the domestic abuse scandal surrounding White House staff secretary Rob Porter (resigned).

It may seem calmer, but things have hardly stabilized. Five members of Trump’s cabinet are currently serving in an “acting” capacity. Four agencies — Labor, Homeland Security, Defense, Budget — are led by “acting” secretaries not confirmed by the senate. Trump’s chief of staff, Mick Mulvaney, is actually his acting chief of staff.

The total number of cabinet secretaries ousted in the first two years of Trump’s presidency: 13.

For some context, CNN provides a pretty stunning statistic. While 13 cabinet officers in the Trump administration have been fired or resigned, at the same point in the Obama administration, that number was 0. In the Bush administration, 1.

Yikes. Another point worth mentioning: most of these secretaries were ousted because of serious scandals or clashes with the president.

Most impressive, perhaps, was EPA administrator Scott Pruitt (resigned), who lasted a shocking amount of time in his post, despite an avalanche of scandal swirling around his tenure, including, famously, dispatching security officials to retrieve lotion from the Ritz.

Secretary of State Rex Tillerson (fired) was canned as bitter animus between the former oil executive and the president spilled into public view. Trump fired Tillerson via tweet, and Tillerson got a call confirming the firing three hours later. Trump later called his first secretary of state “dumb as a rock.”

Shortly after Acosta announced his resignation, Axios reported that Trump was considering firing DNI director Dan Coats (the two have had public tensions) and replacing him with a pundit who has trashed Coats on Fox Business. The historic streak continues!

Given all the departures (willing and unwilling) combined with our short-attention-span news cycle, it is nearly impossible to keep track. So as a service to you, here is a compilation of all departed cabinet members and the reasons behind their exit.

Trump’s first chief of staff never played nice with Anthony Scaramucci, and left the White House after just a few months. He claims he submitted his resignation. The full story of his ouster is more humiliating, and involves tweets.

Tom Price walked so Scott Pruitt could fly. The HHS secretary was the first agency head to resign, in September 2017, after dropping hundreds of thousands on chartered flights. (Previous secretaries typically opted for commercial.)

Shulkin was approved to his position 100-0, but faced struggles in the job. First off, Trump hated him, and criticized him publicly. Second, he faced an ethics investigation for accepting Wimbledon tickets (who among us). The tensions culminated in a tweet, from President Trump, announcing Shulkin was being replaced as VA secretary by the White House physician. Shulkin said he had spoken to Trump that day and the president made no mention he was about to be fired. The White House still insists Shulkin quit.

Tillerson and Trump never saw eye to eye, and Trump ended up replacing him via tweet. When Kelly called Tillerson inform him of his ouster, the former oil executive was allegedly sitting on the toilet with a stomach bug.

Pruitt, though his time in government was short-lived, was the Michael Jordan of absurd ethical scandals. They include: the aforementioned lotion orders, installed a $43,000 phone booth in his office, spent more than $100k on first class flights, used lights and sirens on his motorcade to beat D.C. traffic and get to fancy restaurant Le Diplomate, rented a bedroom from a lobbyist in D.C. for $50 per night, spent $1,500 on fountain pens, tried to use his position to get his wife a job as a Chik-Fil-A franchisee. He resigned after months of Trump ignoring these insane scandals.

Nikki Haley, though one of the biggest names in the administration, resigned with the smallest splash. Despite often contradicting Trump’s foreign policy worldview from her perch at the United Nations, she never earned his ire. The motives for her surprise resignation are still cause for speculation.

A lot of highly accomplished people on this list suffered humiliation at the hands of Trump. None sustained the acute level of abuse that Sessions did. His first and only sin: recusing himself from the investigation into Trump’s campaign (to which he was a top adviser) and appointing a special counsel. Despite being Trump’s first supporter in the senate, he never recovered. Sessions — or Mr. Magoo, as Trump reportedly derided him — was fired as soon as the 2018 midterms passed.

Kelly went from proud head of DHS, to wary chief of staff for Trump, to weary retiree. After Trump called him up to replace Priebus, Kelly struggled to impose some order on the White House, to apparently little success. Trump reportedly resented Kelly’s penchant for structure, and tendency to bad mouth him in private, and forced him out at the end of 2018.

Fearing probes into his many ethical indiscretions from Democrats when they took over the House after the midterms, Zinke quit with a defiant letter of resignation claiming a witch hunt.

Mattis resigned with some flair, quitting in protest of Trump’s abrupt and apparently unplanned decision to withdraw troops from Syria. Trump ended up firing Mattis early. He also trashed the defense secretary on his last day on the job, claiming he “essentially” fired the Pentagon chief.

The former WWE executive appears to have gotten her administration job because of a close relationship with Trump. Don’t worry, they didn’t have a falling out. She left the government gig to lead Trump’s 2020 super PAC.

Nielsen took over from Kelly after he went off to serve as Trump’s chief of staff. Nielsen clashed with the president throughout her short tenure, and wound up meeting with Trump at one point with a resignation letter in hand. Trump didn’t let her resign, and blasted out a tweet shortly afterwards announcing her departure.