Fauci Speaks Out on Blowback He Got for Contradicting Trump: He Called and Told Me to ‘Be More Positive’

Fauci Speaks Out on Blowback He Got for Contradicting Trump: He Called and Told Me to ‘Be More Positive’ 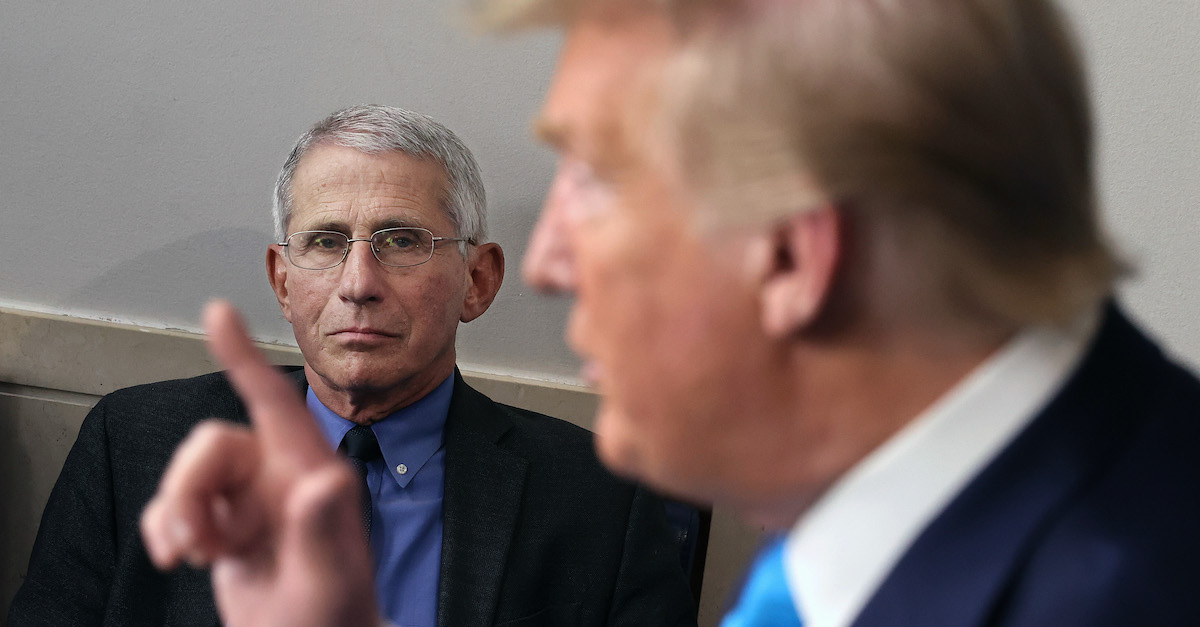 Dr. Anthony Fauci has been very open in the past few days about the difficulties he faced in the Trump administration.

Former President Donald Trump downplayed the pandemic early on — both publicly and privately (most significantly to Bob Woodward), and Fauci said, “I would try to express the gravity of the situation, and the response of the president was always leaning toward, ‘Well, it’s not that bad, right?'”

He was also concerned about the president getting bad information from others spewing non-scientific ideas:

[I]t was clear that he was getting input from people who were calling him up, I don’t know who, people he knew from business, saying, “Hey, I heard about this drug, isn’t it great?” or, “Boy, this convalescent plasma is really phenomenal.” And I would try to, you know, calmly explain that you find out if something works by doing an appropriate clinical trial; you get the information, you give it a peer review. And he’d say, “Oh, no, no, no, no, no, no, no, this stuff really works.”

He would take just as seriously their opinion — based on no data, just anecdote — that something might really be important. It wasn’t just hydroxychloroquine, it was a variety of alternative-medicine-type approaches. It was always, “A guy called me up, a friend of mine from blah, blah, blah.” That’s when my anxiety started to escalate.

Fauci said what he decided to do was not to “proactively go out and volunteer my contradiction” of Trump, but that if he was called on to speak, he would say, “No, I’m sorry, I do not think that is the case.”

Others in the White House “got really surprised, if not offended,” he would contradict Trump to his face in private discussions, and of course there were those moments when Peter Navarro and Scott Atlas felt emboldened to publicly attack him.

Fauci detailed one particular spat with Navarro where the former White House trade adviser was continuing to push hydroxychloroquine, and said that the inclusion of Atlas was particularly difficult for Dr. Deborah Birx because she “had to live with this person in the White House every day.”

Even Mark Meadows, Trump’s chief of staff, apparently called up Fauci at least once “expressing concern that I was going out of my way to contradict the president.”

And, of course, the president himself, as Fauci tells it, called him to grumble a bit and tell him to “be more positive.”