Local Reporter Goes Viral With Tweet of ‘Normal Teen’s Bedroom’ With ‘Shocking’ Signs of Drug Use. The Full Segment is Even Funnier. 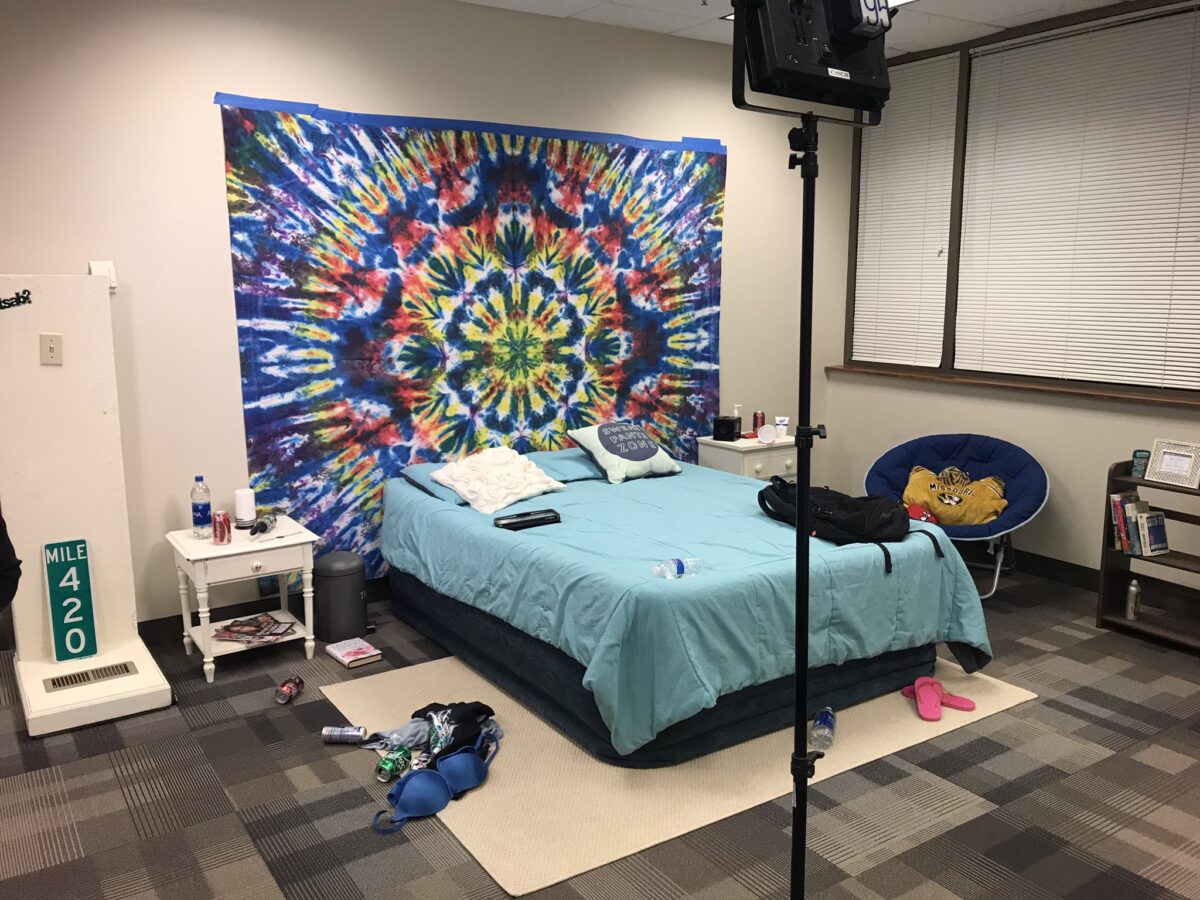 Sometimes a tweet teasing a news segment is little more than clickbait, but sometimes it leads to a truly high-larious payoff (pun fully and unapologetically intended). The latter was the case for Paige Hulsey, an anchor at KMOV, the local CBS affiliate in St. Louis, MO, and the above photo of an alleged “normal teen’s bedroom” who has fallen prey to the evil seduction of marijuana.

Hulsey and her team at KMOV apparently decided Thursday would be a great day to remake Reefer Madness, the 1936 propaganda film (sponsored by our very own federal government) warning of the dangers of “a new and deadly menace…marijuana, the burning weed with its roots in hell!”

“Looks like a normal teen’s bedroom, right? Think again,” tweeted Hulsey, exhorting parents to watch the upcoming KMOV segment to learn how to identify the signs of drug use. “I was shocked at what I found in this room!!!” she concluded, with three exclamation points because it was far too exciting for just one or even two punctuation marks.

Looks like a normal teen’s bedroom, right? Think again. Coming up on @KMOV, we’ll show you what parents should be looking for so they can identify signs of drug use. I was shocked at what I found in this room!!! #stl #n4tm pic.twitter.com/Df2yegDPUq

For the viewing enjoyment of our readers, your friendly neighborhood Mediaite staffers have pulled the video for everyone who doesn’t live in the Gateway City. (To be clear, the only influence I was under as I watched this was a single-serving bottle of GreenWise organic peach kombucha I had with my lunch, which the label warns “contains a trace amount of alcohol due to natural fermentation (less than 0.5%),” so I’d call that darn near sober.)

“Drug enforcement agents are just pleading with parents to take a really tough look at your teenager’s bedroom,” said KMOV’s female anchor to kick off the segment.

“Deaths from overdoses are happening at a devastatingly high rate and the pandemic has seemed to contributed to the problem,” her male co-anchor concurred.

Then it was Hulsey’s time to shine, like a diamond in the sky.

Sadly, the “normal teen’s bedroom” she promised in her tweet was actually a “staged bedroom here at DEA headquarters.”

She then walked through all the “places that teens are hiding drugs in plain sight,” such as secret compartments hidden within otherwise ordinary-looking hair brushes, tampons, and extension cords that could be used to conceal pills or “even booze!”

The secret drug containers were ordered from websites that were “so easily accessible,” said Hulsey, “very popular, very common. I know that I use these websites and I’m guessing that you do, too, so that’s how accessible they are to teens.”

Congratulations, Paige Hulsey, you just told teenagers they should order stuff on Amazon so they can hide their stash from Mom and Dad.

Teens were also ordering prescription medicines online, continued Hulsey, introducing DEA special agent in charge Sean Vickers to explain the dangers of counterfeit pills, which might be laced with fentanyl or other dangerous substances.

We would never make light of drug overdoses (and if you or someone you know are struggling with substance abuse, Students Against Destructive Decisions (SADD) has a list of links that can help here), but this entire segment was so over-the-top. Even the design of the fake teen’s room: that looks far more like what a bunch of feds would design rather than an actual teenager’s room. And if a papasan chair and a bit of laundry on the floor are signs of drug use, well, then, I should have been arrested the last three years I lived in Austin.

Whoa, a “mile 420” highway sign and a tie-dye tapestry? [Gasps and clutches pearls!]

Twitter, predictably, enjoyed Hulsey’s groundbreaking journalism very, very much, mocking the obvious fakery of the DEA’s setup and the hysteria of the news station’s messaging.

A lot of people are talking about the “Mile 420” sign, but if your teen has an 84-inch light stand with an Astra LED-panel studio lamp pointed directly at the bed, that’s probably a bigger cause for concern. https://t.co/60lv2cPXFf

KMOV also followed the teenager from his actual bedroom to at his high school. The skateboard and backwards hat are other signs your child’s on drugs. See clip below:#JustSayNo #kmov https://t.co/nm1Mk97mXp pic.twitter.com/lQ0D1Cm1Km

Since we’re all enjoying this highly authentic bedroom in which a real adolescent lives in actual life, I may as well chime in and note the surprising carpet choice they made for this definitely not fake teen’s room. https://t.co/qHRWSxyCWK

Does your teen have a tie-dye tapestry and keeps stealing mile 420 road signs? Then they most certainly are addicted to injecting SUPER MARIHUANA and need to be terminated immediately! https://t.co/TjXAqKfiY4

Pretty sure my parents won’t find my bag of weed if I hide it right behind this Mile 420 sign. https://t.co/N1Nq3u88jr

who here among us doesn’t like a good session of doing drugs & then lint rolling? https://t.co/fWxj2ugIwa

Some of the critiques even came from a more serious place, pointing out the failures of the War on Drugs and the “false equivalence” between marijuana and more dangerous drugs.

This framing is so troubling:
-The War on Drugs has ruined lives. DEA tactics should be approached with skepticism
-False equivalence between vaping/weed use (“Mile 420”) & more dangerous drugs
-Perpetuates unrealistic stereotypes about drug use
-No public health experts quoted https://t.co/kpqjO6xheV

All the dunking aside, it seems problematic that local news outlets are apparently operating as if imaginary marijuana paraphernalia found on sets staged by a company are somehow evidence of a problem. If you want to cover the opioid crisis, there are plenty of real stories https://t.co/O8WyOVUHR9

this is a fake room set up to look like a teenagers room and it has the most Hello Fellow Kids energy i’ve ever seen https://t.co/vEHUpz6xnI

The bedrooms of teens who die by overdose look nothing like this. No Mile 420 sign. No tie dye. Drugs and alcohol are something they get very good at hiding. Talk to your kids about drugs. Start before they’re teens & don’t use them yourself. https://t.co/Ov2fGB0bH2

Want to see more hysteria about the young folk snorting the marijuana? Watch the riveting trailer for Reefer Madness — or, if you have an hour to spare, the epic film is in the public domain and can be watched at the Internet Archive.

Watch the video above, via KMOV.