This Video Got Mitch McConnell’s Campaign Suspended from Twitter, And It’s Not Even Theirs 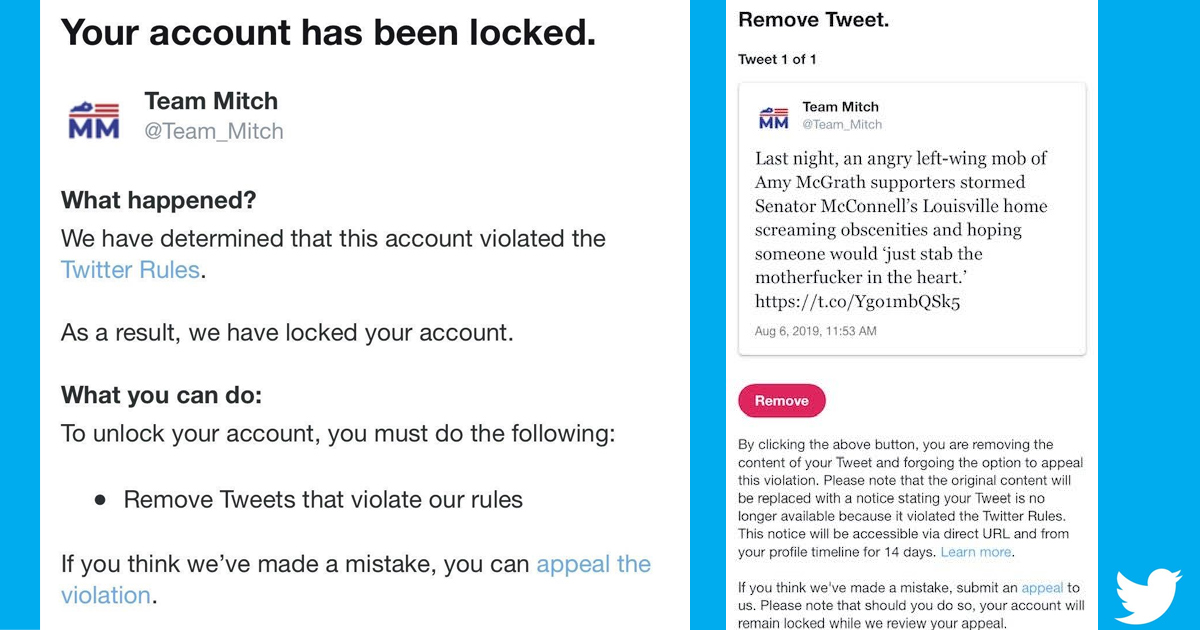 But that video wasn’t one that featured McConnell or anyone in the GOP. It wasn’t a campaign video or a Trump video or a speech. Instead, it was video of “protesters” who gathered outside the Senator’s private residence to shout threats and innuendo, along with plenty of profanity, taunting him and his family, all with undertones of violence and some overt threats of it.

McConnell’s campaign shared that video in a Tweet thread. In the particular tweet flagged by Twitter, the campaign specifically characterized the mob as supporters of Amy McGrath, a Democrat campaigning for his seat.

“Last night, an angry left-wing mob of Amy McGrath supporters stormed Senator McConnell’s Louisville home screaming obscenities and hoping someone would ‘just stab the motherfucker in the heart.'” read the tweet, and it included this video:

Fox News channel carried some of the video on Tuesday, but the above cut is the specific clip that was included in the tweet, sent to Mediaite by the campaign.

“This morning, Twitter locked our account for posting the video of real-world, violent threats made against Mitch McConnell. This is the problem with the speech police in America today,” said campaign manager Kevin Golden in a statement. “The Lexington-Herald can attack Mitch with cartoon tombstones of his opponents. But we can’t mock it.”

Golden is referring to a simultaneous controversy in which the campaign Tweeted images of cut-out tombstones, which included things like “socialism” and “green new deal” under the R.I.P.

One of the tombstones featured just Amy McGrath’s name and the date of the 2020 election with no tagline.

McGrath tweeted about those tombstones.

Hours after the El Paso shooting, Mitch McConnell proudly tweeted this photo. I find it so troubling that our politics have become so nasty and personal that the Senate Majority Leader thinks it's appropriate to use imagery of the death of a political opponent (me) as messaging. pic.twitter.com/2x5kO5jwPi

McConnell campaign manager Golden said “Twitter will allow the words ‘Massacre Mitch’ to trend nationally on their platform. But locks our account for posting actual threats against us.”

The Louisville Courier Journal spoke with protest leader Chanelle Helm on Tuesday, who did not regret any comments made in the video.

“McConnell doesn’t care about people who actually do break their necks, who need insulin, who need any type of medication, because they want to stop and prevent health care for all,” said Helm. “And that is something that every American out here wants. There’s only a few Americans who don’t want that, and those people are politicians and their cronies.”