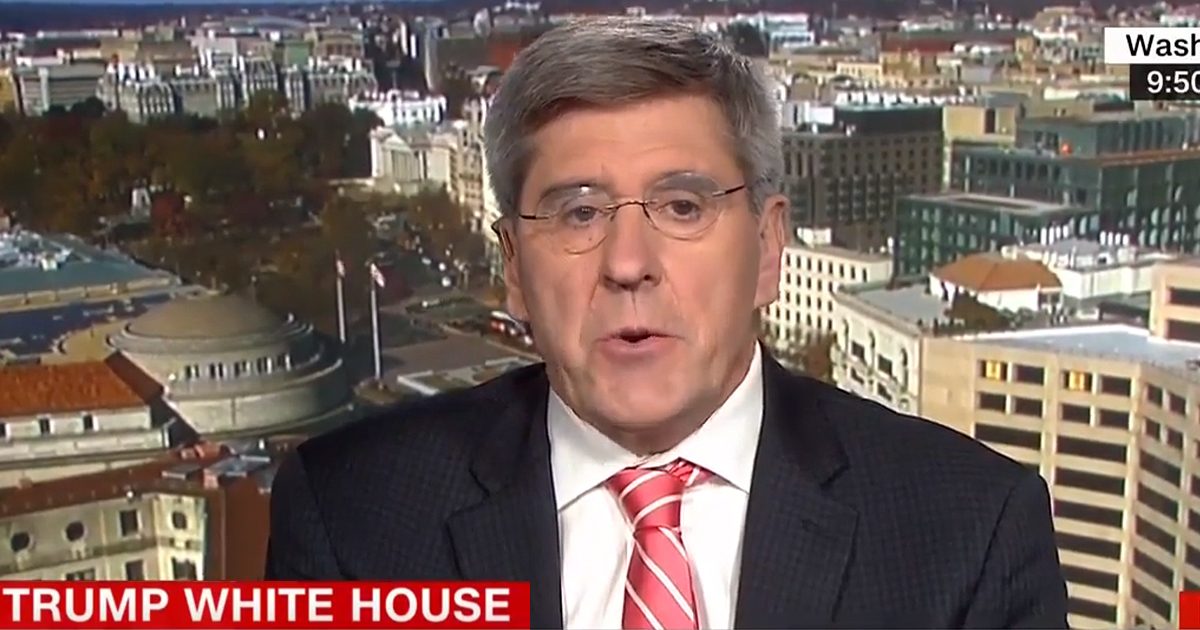 That, shall we say, unorthodox idea was part of a long and at-times head-scratching interview Moore had with New York Times political reporter Lisa Lerer, published on Thursday.

The conservative Heritage Foundation economist was formerly a CNN and Fox News contributor, but suffered an embarrassing, failed nomination to the Federal Reserve a year ago, withdrawing his name after press reports revisited his history of racist and sexist remarks. Moore last made news a week ago, with an absurdly ahistorical take that analogized the small groups of protestors agitating for an end to the month-long, public health lockdowns to Rosa Parks, a civil rights icon who was arrested for protesting a decades-long racist system of Jim Crow laws that disenfranchised and violently oppressed African-Americans.

Lerer began by questioning Moore’s heavy emphasis on reopening the economy as soon as possible, which echoes Trump’s urgency on the topic. Moore claimed that a phased-in approach, which would let smaller communities that have not been hit hard by the coronavirus return to business as usual almost immediately, posed little risk to the public. But he then acknowledged that he had no real counterpoint to public health experts’ argument against that plan, while acknowledging that he could be totally mistaken about his advice.

NYT: What public health officials would say is that part of the reason those places haven’t seen the same level of illness is because they did shut down. And if you reopen the virus will spread.

Moore: Well, it’s a fair point. I can’t argue against that.

I’m not a public health official. Maybe I’ve got this wrong, but it’s because people get these diseases in congested areas. So in the middle of Little Washington, Va., you’re not having people crowded together. So you don’t need the same kind of measures in a little town like that as you do in New York City or Chicago or Detroit.

When Moore was asked about the racial component of the Covid-19 death toll — where African-Americans make up a disproportionate amount of the virus’ fatalities — Moore went off on a tangent that included a brainstorm that he said he had come up with just hours earlier.

NYT: There’s also a racial component, right, which is that the people more likely to get sick and die from the virus are more likely to be African-American. We’ve seen that data too. So how do you weigh the racial inequalities of this virus?

Moore: The people who are suffering the most are minorities. There’s no question about that. By the way, that’s in no small part because minorities tend to be living in major cities where they’re living close together. But they also are the people — I mean, look at the people in the soup lines and the people waiting for The Salvation Army trucks. I mean, they are minorities as well. They are the ones whose lives have been really shattered.

We can use really good public safety measures, social distancing the work force, disinfectants everywhere, masks. I was thinking this morning, and this is just kind of a thought experiment because I was thinking about this — why don’t we just put everybody in a space outfit or something like that? No. Seriously, I mean —

Moore then warned the country could soon be riven by an “economic civil war” in the next few months, where red states open their businesses and blue states do not. But, he told the Times, the country has no choice but to restart its economy.

NYT: But isn’t the concern of the second outbreak part of what necessitates the stay-at-home orders? Are you saying because we don’t know when, or if, a second outbreak could happen, the health risk is worth taking because the economic costs are potentially so severe?

Moore: I don’t even like to put it in a trade-off. What I’m saying is we have no choice. If you don’t have an economy that’s functioning, you don’t have a society. I mean, we’re going to have people starving so we don’t have any choice here really. We have to get things up and running. We have to be really smart. We have to have a functioning economy. How are we going to do it in the smartest way possible with the best screening, best testing? So that’s my take.