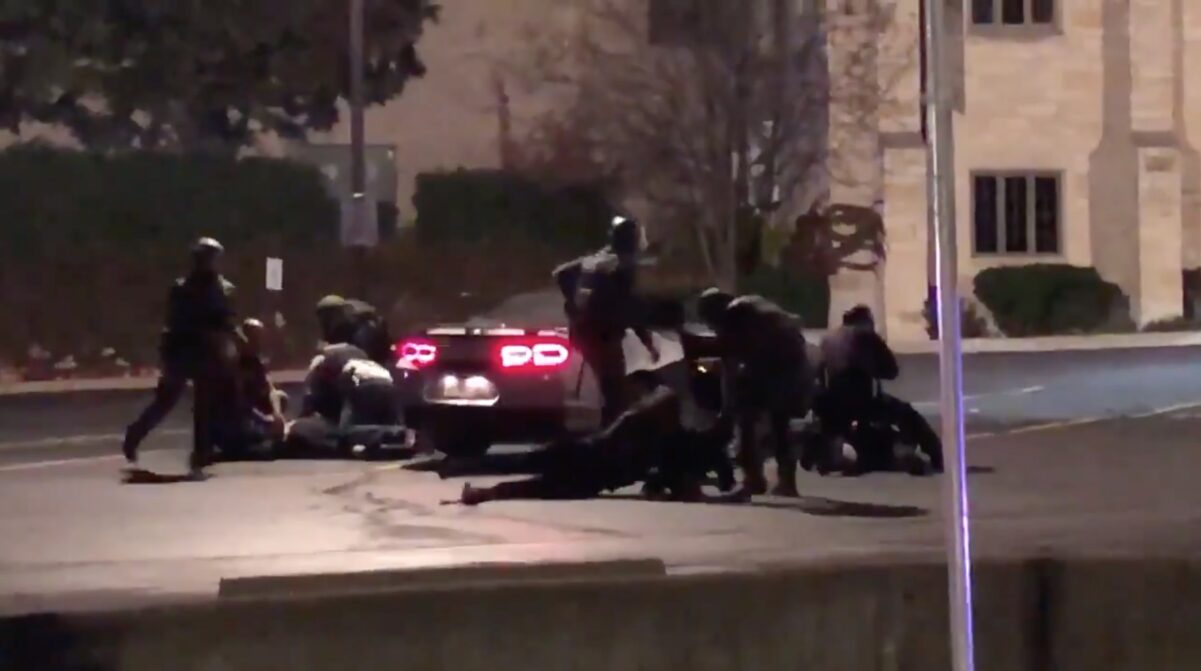 A reporter for The Daily Caller shared video on Friday that purportedly showed police in Wauwatosa, Wisconsin beating two of the outlet’s reporters, including one woman, during unrest that broke out in the city on Thursday evening.

“Daily Caller journalists Shelby Talcott and Richie McGinniss were both beaten Thursday night in Wauwatosa by law enforcement,” the outlet’s David Hookstead wrote on Twitter. He also shared video of the incident, at least some of which was captured by WISN 12 News reporter Caroline Reinwald, writing, “Members of the press (including Richie and Shelby) can be seen being thrown on the ground and ripped out of a vehicle by law enforcement. It’s hard to tell if this is China or America.”

Daily Caller journalists @ShelbyTalcott and @RichieMcGinniss were both beaten Thursday night in Wauwatosa by law enforcement.

In the video, you can hear the attack begin. It’s a sickening situation. Thread: pic.twitter.com/5kwJtTupbD

The National Guard confirmed with our newsroom today this is not them making arrests and says it did not make any arrests last night. I have reached out to Wauwatosa Police to check if they are the arresting agency. @WISN12News

The video footage, apparently captured by a cellular device, shows an unidentified male — presumably McGinniss — backing away from officers at the scene, repeatedly saying “Yes, sir,” and disclosing that he held press credentials. Officers appeared to pursue him while becoming increasingly aggressive, and eventually demanded the individual get on the ground. Footage of the incident subsequently went black.

Hookstead shared an image of McGinniss with a head wound after the incident, suggesting that neither he nor Talcott were arrested.

Unrest broke out in the city after officials announced that there would be no charges in the February shooting death of 17-year-old Alvin Cole, a Black teen shot and killed in February by Officer Joseph Mensah, who is also Black. Milwaukee County District Attorney John Chisholm said Wednesday Cole fled from police with a stolen 9 mm handgun, and that he fired a shot at officers while fleeing.

Wisconsin Gov. Tony Evers (D) activated the state’s National Guard to assist police in responding to the scene on Thursday, which included the arrest of Cole’s mother and sisters — Tracy, Taleavia and Tristiana — around 9:00 p.m. A curfew in the city began at 7:00 p.m.

McGinniss and Talcott have faced similar scenes in recent months. Talcott and Jorge Ventura, a field reporter for The Daily Caller, were detained by Louisville police last month during unrest in that city over the death of Breonna Taylor, a 26-year-old woman who died in a police shooting in March. In August, McGinniss captured footage of riots in Kenosha, Wisconsin, which included the death of 36-year-old Joseph Rosenbaum, who was allegedly shot by 17-year-old Kyle Rittenhouse.