15 Percent Of World Disabled | Where Is The Media

15 Percent Of World’s Population Disabled: Where Is The Media? 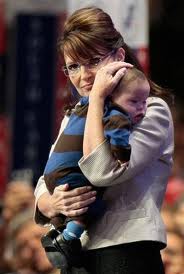 I spent a lot of time reading through Sarah Palin‘s pretty much completely uninteresting emails last week. Yes, there were some amusing moments, but overall, they proved that she was running a functional government, the emails of which don’t make for particularly spicy reading. One thing that stood out to me was the email she wrote before the birth of her son Trig.

It’s not very often that you see anyone discussing the issues Palin does in that email. As some background, she chose to write an email, with God as the author’s voice, to tell her friends and family that she was having a child with Down syndrome. This passage essentially summarizes the overall theme:

Trig’s mom and dad don’t want people to focus on the baby’s extra chromosome. They’re human, so they haven’t known how to explain this to people who are so caring and are interested in this new little Alaskan. Sarah and Todd want people to share in the joy of this gift I’m giving to the Palin family, and the greater Alaska family. Many people won’t understand… and I understand that. Some will think Trig should not be allowed to be born because they fear a Downs child won’t be considered “perfect” in your world.

In some ways, the email is touching. It paints Palin as a caring and generous mother, and helps to shed light on issues that arise when a parent finds out that their child may be disabled. Her book, “Going Rogue” expands upon the themes she touches upon in the email, and the way that she broaches the subject is commendable. For someone as strongly pro-life as Palin is to admit to having hesitancy about having a Down Syndrome child is a courageous move.

Did I have enough love and compassion in me to do this? Don’t you have to be wired a little differently to be gifted with the ability to raise a special needs child, a child who isn’t “perfect in the eyes of society? I didn’t know if I should be ashamed of myself for even thinking these things.

In reading Palin’s opinions on her child and special needs children in general, it struck me that these aren’t things that we hear about very often, or really at all, in the media. Yet, 15% of the world’s population is disabled. Where are the stories about these people?

The only stories we hear about in the media are shocking and sensationalist. For example, this man recently made news for forcing a mentally disabled woman into prostitution. Stories of violence and mistreatment of the handicapped are what are making the news. Are they completely horrible? Absolutely. They turn my stomach every time I see them. But they don’t directly address the bigger issues that the handicapped are facing in America, which essentially boil down to a lack of federal funding.

Many insurance companies exclude certain disabilities from coverage because they expect that the state will pick up the costs. So, when states make cuts to programs that support the disabled, the families of the disabled have to pick up the tab. Health care without insurance is not cheap and generally speaking, those who are handicapped suffer from more health problems than the average person.

Along similar lines, the Individuals with Disabilities Education Act, (IDEA) which was passed in 1990 mandates schooling and therapy from birth through age 21 for all children with disabilities. While this was passed in reaction to earlier laws that kept disabled children out of public schools, and was a huge step for those with handicaps, it still isn’t enough. Although the IDEA has an annual budget of $12 billion dollars, this only covers 12% of the costs of educating those with special needs. So the laws mandate schooling, but don’t offer enough funds to run successful programs. As a result, State run programs have to cut corners, and can’t offer the same level of support that private organizations can. Private organizations are often, you guessed it, expensive.

These are just a few of the problems that the disabled are facing. In addition, there are obvious stigmas attached to being handicapped; physical limitations, medical problems and a host of other issues. But perhaps the biggest issue the disabled are facing is that they lack a voice. The media isn’t covering their stories in the way that they should. There are not nearly enough advocates for the handicapped.

Which brings us back to Sarah Palin. In some ways her openness about her son Trig is wonderful. When I interviewed Mediaite’s Tommy Christopher, he pointed out that “there are very few representations of disabled people as people”. Palin is helping to change that with Trig.

But then there is the matter of her political approach to the issues of disabilities. Palin is pro-life, and holds firmly to her principles. But her decision to have Trig, even with prior knowledge of his Down syndrome puts her in a minority: research from the Children’s Hospital in Boston has shown that 90% of women who receive the news that they are having a Down syndrome child choose to terminate the pregnancy.

Palin’s views on these issues are important, as she appears poised on the edge of the 2012 GOP race, ready to toss in her hat. Her statements in 2008 that special needs families would have an advocate in the White House were she to be elected are interesting to look at now that she has another potential shot at ending up there. As Tommy pointed out:

Simply having a special needs child doesn’t confer you with automatic disability street-cred, and although she had a good record as governor, her party’s current budget slashing will hit special needs kids disproportionately.

Similarly, individuals with Down syndrome only account for a small percentage of those who are disabled. There is a huge spectrum of handicaps that affect Americans. One person can’t hope to speak for or represent all of them. Not that Palin has tried to do this, but she is one of the most visible public figures who in some way represents the disabled.

She should be more aware of this. But the burden shouldn’t just fall on Sarah Palin, despite the media’s eagerness to point the blame finger at her. The disabled won’t get the support they need until they have multiple voices on their side. The media can help with this: we all need to become more comfortable discussing disabilities. Only then will we gain the capacity to confront the issues and change them.