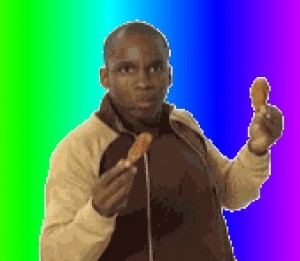 If you haven’t done it yet, let me save you some time. Typing 2204355 into Google and pressing the “I’m Feeling Lucky” button produces this, a video loop of what appears to be a Dave Chappelle impersonator attempting to hypnotize you with a pair of chicken legs. Since Monday, this peculiar internet phenomenon has been annoying some (like me), and baffling others. Luckily, Salon’s Matt Zoller Seitz is on the case, and has unraveled more than enough of the mystery.

Why does this annoy me so much? Because this is the kind of time-wasting internet dorkery that gets urgently G-Chatted to me by certain friends who, while admirably eclipsing my own nerddom, don’t seem to realize that some professional writers don’t actually find the occasional brain-turd helpful to the process. Great, I can superimpose bacon over any web page. That’s really going to help me deconstruct the Rapping Weatherman.

There are exceptions to very rule, of course. I do like “Let me Google that for you,” which lets you snottily reply to someone when they ask you a question that they could have more easily looked up themselves. It has the advantage of meta-highlighting the wasting of time by actually taking more time than actually answering the stupid question would have.

Matt Zoller Seitz, former Tango to Alan Sepinwall‘s Cash at the Newark Star Ledger, gets as close to the bottom of the 224355 search as anyone could possibly want. The video loop is from a web-only Kentucky Fried Chicken ad campaign called “Unthink KFC.” (Video below)

Matt goes into considerable detail, so please check it out. He has earned the clicks like a mofo, as evidenced by this most amusing passage:

Alas, I can’t identify the actor in the 2204355 loop. An hour or so of perusing actors’ online résumés yielded no likely suspects, and given certain bloggers’ outraged response to the campaign’s parade of stereotypes (tight-assed WASP, kamikaze Japanese guys, shimmying brothas and sistahs), I doubt this actor, whoever he is, would list such an ad on his résumé. Then again, if this mini-craze goes on for a couple more days, he might decide to hold a press conference.

First of all, if you’re reading this, 2204355 actor, please get ahold of Matt so he can end his quest. Second of all, really? The chicken dance commercial is racist? Given the particular ugliness of anti-black stereotypes, I can understand the sensitivity, but at a certain point, attempts to sidestep them can be as glaring as the stereotypes themselves. Sure, they could have made the black guy dance like Elaine from Seinfeld, and had the white guys krumpin’, or they could’ve just scrapped the whole “chicken dance” idea, but doesn’t attention  to things like this water down the deserved outrage over things like this?

This reminds me of the flap over NBC’s Martin Luther King Day soul food menu. There was a huge uproar, until it turned out that the chef who thought up the idea was black.

Then again, the blogger who Matt links to has a point about a different “Unthink Chicken” ad that features black folks, white folks, and a pair of kung fu masters.

Here’s the KFC commercial from which the 2204355 loop was culled. You tell me.