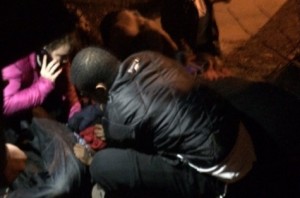 Police in Minneapolis are searching for three white males who allegedly opened fire on a #BlackLivesMatter protest, injuring five.

Activists told the Minneapolis Star Tribune that the men were white supremacists who had been harassing protesters for some time. When a group of protesters tried to back the men away from the protests, at least two of them opened fire. None of the injuries are considered life-threatening, although one protester shot in the stomach was taken to the hospital for overnight surgery.

Protesters have been camped out in front the police department’s 4th Precinct ever since the shooting death of Jamal Clark during an arrest. But Clark’s brother asked protesters to end the encampment in the wake of Monday night’s shooting.

“We appreciate Black Lives Matter for holding it down and keeping the protests peaceful,” he said. “But in light of tonight’s shootings, the family feels out of imminent concern for the safety of the occupiers, we must get the occupation of the 4th precinct ended and onto the next step.”

UPDATE–1:35 p.m. ET: The Washington Post reported that one of the three suspected shooters has been arrested. Police are continuing to search for others who have been connected by authorities to the incident.

UPDATE–4:08 p.m. ET: Minneapolis Police arrested a second suspect shortly after in the southern part of the city.

UPDATE – 11:05 P.M. EST Two days after the crowd was attacked, the New York Times reported that four men have been arrested for the attack, and their names have been released: Allen Lawrence Scarsella, Nathan Gustavsson, Daniel Macey, and Joseph Backman. All four are white, and are currently being held in jail.