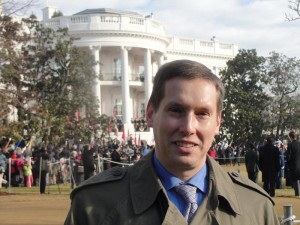 The White House press corps is home to several proficient and prolific Twitter users, among them  ABC News’ Jake Tapper, CBS Radio’s Mark Knoller, and NBC’s late adopter, Chuck Todd. But there’s only one White House correspondent who has made his Twitter bones without the aid of a tether to the dinosaur media, or even to the baby dinosaur medium of blogging: West Wing Report‘s Paul Brandus, whose indispensable tweets have made him the leading vote-getter for the 2011 Shorty Journalism Award. The Twailblazer™ has kindly agreed to answer our 5 Quick Questions, in between tweets.

West Wing Report is a spin-free mixture of White House info, scoops, historical references, media insights, and the (very occasional) pop-culture tangent, all of which spring from the mind, and keyboard, of 20-year journalism vet Paul Brandus. While West Wing Report boasts a not-too-shabby follower count of almost 31,000, the real measure of  WWR‘s success is its influence. It’s not how many people follow you, but who follows you, and how much attention they’re paying.

On that count, WWR boasts a roster of followers that includes political heavy-hitters, media insiders, big-time journalists, and the odd celebrity. The website Klout.com ranks West Wing Report‘s influence in a tie for 5th place with Jake Tapper and Politico, trailing only a handful of big news sites like CNN.

Part of the genius of West Wing Report is the lack of emphasis on its one-man-band creator, in favor of content that is made for Twitter, and Twitter alone. It’s a canny strategy which recognizes that personalities come and go, but a trusted brand (CNN, Fox News) endures. Early on, this shift in emphasis led to an almost Keyser Soze-like mystique, as many of my Twitter followers, and some of my White House colleagues, wanted to know “Who is West Wing Report?”

My own observation of Paul Brandus is that he’s a ubiquitous, hard-working presence in the White House briefing room, and he’s always got his ear to the ground. Obviously, it takes a hell of a forward-thinker to make the kind of leap to a new platform that Brandus has, but he executes it using good old-fashioned shoe leather reporting, and a hint of dry wit.

If you don’t already, I highly recommend that you follow West Wing Report on Twitter, and cast your vote for WWR in this year’s Shorty Awards. In the meantime, check out West Wing Report’s answers to our 5 quick questions:

1. After so many years in dinosaur media, what made you decide to become a being of pure Twitter energy?

People are busier than ever. They consume information quicker – in what I call “nuggets” – that must be direct and to the point. Twitter is a perfect vehicle for this, and you’d be surprised at how much you can say in 140 characters. Ironically, Twitter more closely resembles one of the older forms of media – all-news radio – than anything else. No time for BS – just deliver the information quickly and get on with it. Because I work alone, I’m more nimble and react faster than cable TV, which relies on a team of people to deliver the product to the customer. It’s a more cumbersome production process. And, unlike TV news, my customer base is growing rapidly. Comparing my 31,000 customers to, say, the cablers in primetime – 8pm – I’m 1.3% of Fox News’s peak prime time audience, 2.8% of MSNBC, 3.2% of CNN and 6% of HLN. That’s a pretty good niche for one guy, and that’s why I have sponsors and am turning a profit. All from one platform and one brand that I created from scratch. By the way, I call my followers “customers” because I have to compete for their valuable time and attention every day, and there are other places they can go.

2. How do you decide when, and what, to ask at a White House briefing?

My customers tell me – I conduct surveys – that they don’t care about the who’s up/who’s down, spin patrol//inside baseball stuff that some reporters seem to thrive on. They do care, however, about the basic questions: what’s being done to create jobs? Is my family safe? What’s going to happen to social security? What about $4 gas? I zero in on this bread-and-butter stuff whenever I can. When I report to my customers, I include this basic information along with some broader context, which the surveys show is very helpful.

3. The White House Press Corps is home to several prolific Twitter users. Is there something about the beat that lends itself to the format?

The White House can be a non-stop place. The briefing that you see on TV, when there is one, is only 45 minutes or so, but there’s always stuff going on the rest of the time. You just have to dig it up with the old time tactics – phone calls, questions, and connecting the dots. Because Twitter is like a utility – it’s always on – it’s easy to pass along information and context when it’s appropriate.

4. Few would have predicted Twitter’s dominance (several of our colleagues were late-adopting skeptics). What do you think is the next step in new media evolution?

Technologies are hard to predict. A decade ago, no one heard of Google and the iPad is less than a year old – and look at the impact it has had, for example. What’s easier to predict is the way in which consumers will consume. They’ll continue to pick and choose information that suits them, and consume it at a time and on a platform of their own choosing. The trend of content producers leveraging information onto multiple platforms will accelerate. This is OK from a capital standpoint, because the cost of acquiring content is largely borne upfront anyway, and then amortized as the content is spread across multiple platforms. I do think content on mobile devices is the area to focus on, however. No question about it.

5. You have some very influential Twitter followers. Have you ever gotten a follower email notification that made you do a double-take, and why?

When I worked at NBC News many years ago I, like many Americans, loved Katie Couric – and still do. It was a real treat when she began following me a year ago. But it also means that influential people in more traditional forms of media – in her case a nightly 22-munute show – are paying attention to new forms of media. Some, like Katie, are resilient and adaptive to these new platforms; others not so much.