6 Negotiators Who Are Better than Donald Trump 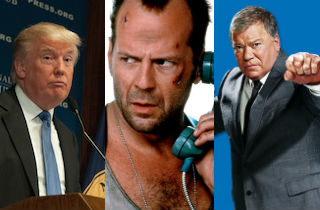 At one point during his candidacy announcement Tuesday morning, Donald Trump decided to “tell [a] couple of stories about trade.” His main line of reasoning was that he, New York businessman extraordinaire, was a good negotiator, but President Barack Obama was not.

Like any good presidential candidate, Trump laid out the evidence for his argument in a fit of angry shouting:

So yeah, sounds like Donald’s a little miffed about Obama’s poor negotiating skills. The implication here is simple — Trump’s a better negotiator, and as president, he won’t allow another Bowe Bergdahl to happen.

But this begs the question — is there anyone else who’s as good as, or better than, Trump at negotiation? We’ve compiled a list of possible candidates for your consideration.

If you pretend Live Free or Die Hard and A Good Day to Die Hard don’t exist, you’re left with the original trilogy of Die Hard films and their bad-ass hero, Det. John McClane. Played by Bruce Willis, McClane is what you’d call a master of “brass tacks.” In other words, he doesn’t really screw around, opting instead to get the job done. Sure, his tactics often result in the deaths of countless bad guys, but forget about it! They’re bad guys.

Forever known as Captain James T. Kirk of the Star Trek‘s Starship Enterprise, Williams Shatner‘s life after Trek has included great things. Like his perpetual commercial acting gig for Priceline.com as the “Priceline Negotiator.” Not only does he manage to get the greatest (if not unheard of) hotel, airfare and car rental deals for customers, but Shatner also performs advanced fighting techniques while wearing fine suits.

Shatner’s not alone, for his fictional daughter Kaley Cuoco has adopted the “Priceline Negotiator” mantle, too. And all the same accolades apply — obtaining fantastic (re: fantasy) deals for customers, all while kicking ass in women’s dress suits. Thereby proving the adage that women can do everything men can do, except in high heels. Add to Cuoco’s resume her ongoing stint as The Big Bang Theory‘s Penny, and you’ve got yourself a top-notch negotiator.

Everyone loves Samuel L. Jackson for his portrayal of Jules Winnfield in Pulp Fiction, especially for his violent use of Ezekiel 25:17. Yet it’s when Jules re-thinks his use of the verse in the film’s last scene that his true prowess shines — not as a contract killer, but as a negotiator. It’s in that moment that Jules is finally able to not kill someone, but still get the job done. Also, it’s Sam Jackson. Of course he’s a good negotiator!

Pawnee, Indiana’s parks and rec department survived only because of Leslie Knope‘s phenomenally happenstance negotiating skills, but it still survived! For seven seasons of Parks and Recreation, no less. As played by Amy Poehler, Leslie’s adept skills as a master debater got her and her department in and out of several precarious situations. But let’s face it, her argument for breakfast food is what makes her great at her job.

Same goes for Ron Swanson, whose mustache will haunt Nick Offerman for the rest of his natural life. Just the sight of Ron’s stern face was enough to strike fear into his opponents, as well as Parks and Recreation viewers at home. Yet we all knew that his softer side, usually signaled by his contagious giggle, was his most powerful bargaining chip. Also, he supported Leslie’s push for breakfast food.