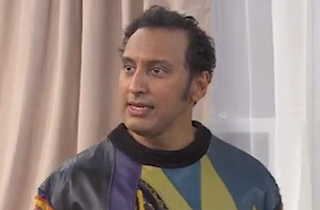 In December 2010, Katie Couric suggested that America might need a “Muslim version of The Cosby Show” to do for Muslim-Americans what Bill Cosby’s classic sitcom did for African-Americans in the 1980s. Two months later, The Daily Show delivered with a sketch called “The Qu’osby Show” starring correspondent Aasif Mandvi.

Now, nearly five years later, Mandvi has decided to turn the idea into a full web series, and he’s currently crowdfunding donations to finish post-production on the project. In a video posted to YouTube Monday, Mandvi explained why he believes “The Qu’osby Show” is important and premiered some clips from the new series.

“I am developing a web series to fight misinformation, stereotypes and bigotry towards Muslims and people associated with Muslim communities,” Mandvi says in the video. He calls on viewers to help “bring this to people who need it the most — you know, bigots.” He then shows clips of anti-Muslim comments made by Fox News’ Bob Beckel, Brian Kilmeade and Eric Bolling.

Mandvi set a goal of raising $20,000 in the next four weeks, and teases rewards like tickets to The Daily Show and copies of his new book, No Land’s Man

, though the video itself does not include a link to the fundraising site. It appears that the project is associated with Schlep Labs, which produced comedian Sarah Silverman’s famous campaign ads for Barack Obama in 2008 and 2012.

Watch the original sketch below, via Comedy Central: