Adam Carolla on Mistresses Gone Wild in 2009: “You Bitches Have Gotten Out of Hand”

Adam Carolla on Mistresses Gone Wild in 2009: “You Bitches Have Gotten Out of Hand” 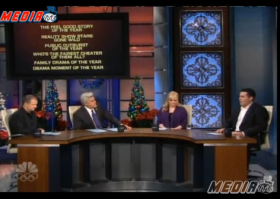 Well! I watched this clip to check out what Meghan McCain had to say last night on Jay Leno‘s 2009 year-end panel, but it was Adam Carolla who made me double-take. He does have a point that this year has seen a lot of “mistresses” (that is to say, women with whom married men are having affairs) behave in manners that said married men would prefer they didn’t. (Understatement.) But we maybe detect just a smidge of misogyny when he said: “You bitches have gotten out of hand.” Carolla went on to explain how it is:

Here’s the deal: We give you a little WAM, a little walking-around money, we put you up in an apartment building and you shut up. That’s how it goes. Did you guys see Goodfellas? And by the way Europe must be laughing their asses off at us right now…my son’s not going to be able to have a mistress the way things are going. My daughter’s going to be out of a job.”

Yes I know, Carolla was the co-host of The Man Show. I get it. I get the humor part. I get the shock part. I get that he doesn’t really want his daughter to grow up to be a mistress part. But eh, not crazy about the label or the sentiment.

That aside, it was a pretty good segment! McCain, whom I pointed out yesterday is the one big Daily Beast-minted breakout celebrity, held her own well with the comics, not going for the pre-crafted joke but more for the authentic response, which connected with the audience. Jim Norton was funnier than he was in that atrocious Twitter segment. I also agree with Leno that there is not enough opprobrium heaped upon John Edwards.

p.s. In researching this post, saw that Carolla had hosted a pilot version for NBC of the UK’s smash hit show Top Gear. I cannot believe they passed. That show is ginormous over there.