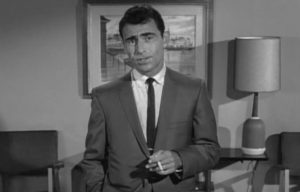 As we told you the other day, this year’s annual New Year’s marathon of the beloved TV classic The Twilight Zone will include a fan-voting component to choose what airs during primetime on Sunday. Syfy will give users on Twitter a 15-minute window to vote between a number of yet-to-be-determined episodes to compete for a three-hour block, encouraging a social media component to the legendary marathon as we ring in 2017.

But Syfy has also announced what the full schedule of episode’s will be for the marathon, which will be the 22nd such annual tradition for the Rod Serling classic. All told, 128 episodes will air during the marathon on Syfy, beginning on Saturday December 31st at 6 a.m. with the 1983 film “Twilight Zone — The Movie,” from John Landis, Steven Spielberg, Joe Dante, and George Miller. Then, the traditional episodes will begin airing at 8 a.m. and continue nonstop until the early morning hours of Tuesday, January 3rd.

All times listed in EST:

While I appreciate that it seems Syfy is opting for some lesser known episodes to include in this weekend’s marathon, there are some notable episodes left off this list. No Monsters Are Due on Maple Street? Or Eye of the Beholder? To Serve Man, Time Enough at Last, and Five Characters in Search of An Exit are all also missing from the list. This seems to be a pretty intentional move to leave these off the schedule, given how popular they are among fifth dimension diehards. Guess we’ll just have to binge on all the others and remind ourselves how well they stack up.

Then again, will they all be the fan vote eps? Enjoy your journey into a wondrous land of imagination, Mediaite loyalists…