If George Zimmerman can sell his first-ever painting for more than $100,000 on eBay, why shouldn’t another artist be able to sell his anti-Zimmerman piece for a fraction of that price?

On the same day that Zimmerman’s auction closed, eBay reportedly yanked a piece by artist Michael D’Antuono from the site that depicted a police officer in a Ku Klux Klan hood, who may or may not be Zimmerman, with his gun pointed at a young Trayvon Martin holding out a bag of Skittle-like “Sweeties.” 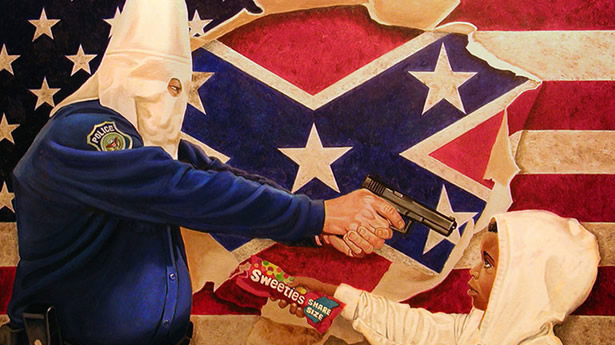 D’Antuono explained the situation on his blog:

On the same day that George Zimmerman closed his ebay auction of his painting for over $100,000, the online auctioneers removed my anti-racism painting inspired by the Zimmerman case, “A Tale Of Two Hoodies” for being “hateful or discriminatory.” While Zimmerman was allowed to capitalize on his ill-gotten notoriety, I was denied the opportunity to raise funds to help the very foundation named in honor of Zimmerman’s victim.

The artist went on to say that the bidding on his piece had just passed the $25,000 mark on day two of its auction, with half of the proceeds going to The Trayvon Martin Foundation. According to an email the artist received from eBay, items “promoting or glorifying hatred, violence, or racial or religious intolerance aren’t allowed.” The email specifically referenced the “images or icons associated with the KKK” in his piece.

“In my opinion, any policy that allows a murderer to profit from his crime, but deems art that speaks out against racial injustice and benefits it’s victims ‘hateful and discriminatory’ needs to be reevaluated,” D’Antuono wrote.

Unlike Zimmerman’s painting, there is no apparent evidence that D’Antuono copied a stock image to create his piece.

[h/t and image via Raw Story]
[photo via screengrab]