Art Of The Trench: Burberry Takes A Curious Turn Into Social Media 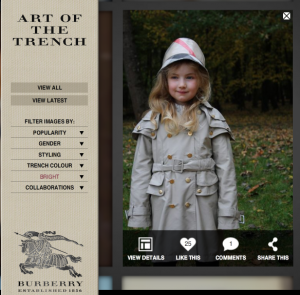 As Reuters reported from the trench coat Motherland on Monday, Burberry has dug into the social networking mine with the launch of its new website artofthetrench.com. Burberry’s Facebook page calls it “a living celebration of the trench coat and the people who wear it.” While many designers (@DVFNewYork) and retailers (@Bloomingdales) have taken their businesses to Twitter, Burberry is the first major fashion titan to actually create a social media labyrinth of its own.

With Art Of The Trench, Scott Schuman of Satorialist fame has teamed up with Facebook to create a social networking fashion blog bizzarely centered solely around the Burberry trench coat. The site features a colorful grid of photos of street walkers – all non-generic, beautiful and photogenic – sporting the renowned and timeless trench. Many of them have tattoos, some are riding their bikes, and others have scarlet red hair. When you click on one of them, their snapshot becomes enlarged and the Facebook influence becomes clear – you can “like” or “leave a comment” and “share” the image. You can even sort the images by popularity, or weather!

The site has media and fashion junkies (and even the Financial Times!) buzzing. And we’re not surprised – the interface is pretty flawless, and the design itself is attractive. But as timeless as the Burberry trench is (and as good looking as these supposed non-models are), will the new site actually affect sales, as NYT Fashion speculated in its tweet yesterday?

“Those raincoats, a 95-year-old fashion icon, remain Burberry’s best-selling item, and Ms. Ahrendts — who now runs the company — is hoping to move the quintessentially British brand into the age of the Internet to attract a new generation of shoppers.”

We don’t doubt that Art Of The Trench will be bookmarked and thrown in our fashion blogs folder, among the likes of The Sartorialist and Garance Doré, but will we ever revisit it? However iconic, the revolving of a website – a social networking one no less – around a singular piece of clothing is a risky move. While it has caused a sudden buzz from a wide array of media outlets, Art of the Trench just doesn’t have the repeat user pull that it needs to be a sustainable campaign. Unless of course, this is just one part of a grander plan. Perhaps the site will expand in a LookBook-ish type way. But to maintain the hold on the web attention they’ve managed to attain so quickly, Burberry will have to deviate from only focusing on the trench. Which was sort of the site’s manifesto to begin with. It’s a Catch-22 that’s relevant in a day and age where anyone can start a blog or create a website on a whim.

There’s no doubt that the trench will stick around, but only time will tell if the Art of it will.