As ‘Viral Santa’ Changes His Story, There Are Many Unanswered Questions for Him and the Media 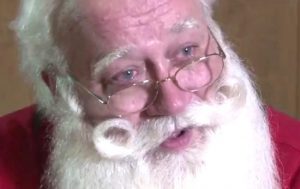 Yesterday, I wrote an extensive story on why I am highly skeptical of the super-viral “Five-year-old Boy Dies in Santa’s Arms” narrative which dominated the news cycle on Monday and Tuesday. While the truth of his story is important, my primary concern was how and why the news media jumped all over a tale which had absolutely no corroboration when there should be plenty of it.

Since I wrote that piece, the Knoxville News-Sentinel has admitted that they cannot verify the essense of the story after they already published it. Think about how classically “2016” that is. A newspaper decided to verify an inherently fishy story AFTER they published it, and then only because it went viral and was instantly picked up by nearly every major news organization in the English-speaking world (and then “Snopes” couldn’t find a hospital where this event could have taken place).

After that, many of those news outlets which blindly repeated the exact same original story without any effort to follow up or substantiate many missing details of the story, began to back away from it as well. My favorite “back off” came from the Raleigh News & Observer, which correctly pointed out that “all the signs were there” from the beginning that the story was very suspicious.

So why then why the hell did everyone run with this without a hint of restraint?!

The short answer to that question is that the news media is totally broken and completely vulnerable to popular narratives which are not true, but which, at some level, make people feel good. No one bothered to verify the story because it wasn’t worth the time/effort/resources to do so when all you have to do is copy and paste the original version to ride the wave of a viral sensation.

The really scary part is that this type of thing isn’t just happening with mostly harmless Santa stories. I have seen it happen in far more serious matters where innocent lives have been destroyed by the news media rushing to judgment and not verifying a narrative they liked. In fact, my extensive experience investigating the Penn State “scandal” is why I believe I was very well positioned to see some of the issues in the Santa narrative.

As for the Santa story itself, there have been some interesting developments from Eric Schmitt-Matzen’s (aka “Santa”) side of this fiasco.

Later yesterday, “Santa” stood by his story and claimed that he couldn’t provide any verification because it would violate the privacy of the boy’s family and possibly endanger the job of the mysteriously AWOL nurse (how convenient!) who summoned him to the unnamed hospital to entertain the dying boy. Today, however, thanks to the first interview with his wife (who apparently plays Mrs. Claus as part of their family business), the story has changed in a VERY significant way.

“Mrs. Claus” told the local NBC affiliate (for a story the station laughably headlined “Facts Verified In Santa’s Hospital Visit Story,” when in reality the only thing they reported as “verified” is that “Santa” told the same story to friends soon after it supposedly happened) that she remembers this occurring in Mid-October. This is significantly different from the very vague “November” timeframe first provided to the columnist, Sam Venable, who wrote the  original story.

This is a critical change to the story which should further raise questions in several ways. First, how do you not remember even the month in which something like this happens?! Especially when your story is that you were so upset that you had to stay alone in Knoxville to recover from it (who wants to be alone for days after such an event?) while your wife left to visit family in Nashville?

Further exposing the implausibility of such a dramatic memory loss is that Schmitt-Matzen is, based on a Facebook posting from October 3rd, is  a huge Donald Trump fan. The posting below appears to be from him: 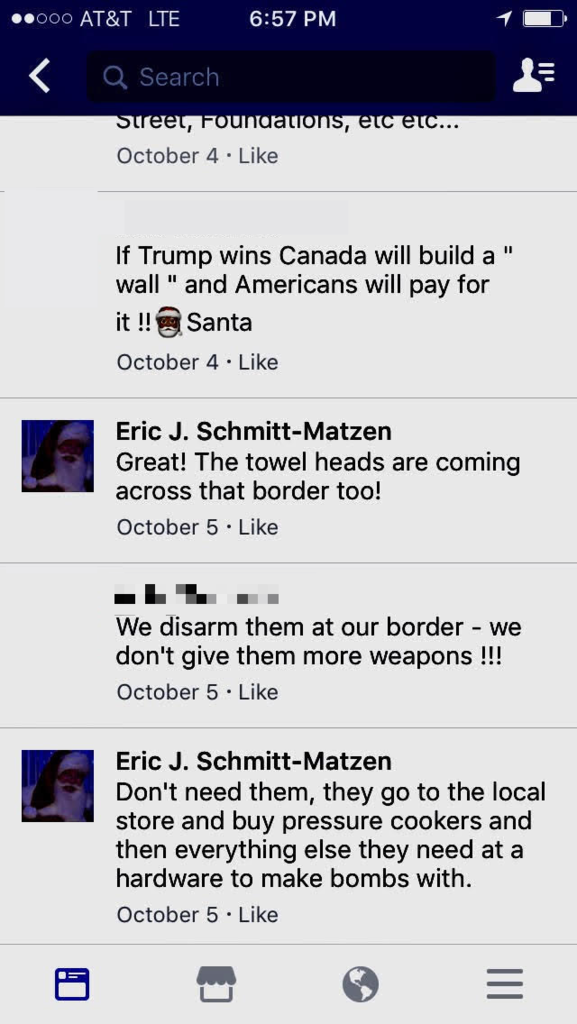 (Names of other commenters have been blurred out.)

So not only did he somehow forget the month in which this unforgettable episode occurred, but he originally thought it happened AFTER Trump’s election, but now says that it occurred well BEFORE the shocking event which none of us will ever forget?

Then there is the problem of October itself. Is it really plausible that with the weather still very warm, the leaves not even having changed colors in Knoxville, and with Halloween at the forefront of every child’s mind, that a five-year-old boy, fighting for his life, is so obsessed with Christmas that Santa is rushed in by a nurse and that, with zero notice, the parents have Christmas present wrapped for Santa to give him? And that’s not even accounting for the problem of the parents of this dying child (and the medical personnel) leaving him alone with a perfect stranger rather than, as every other parent in the world does, take photos of their son’s final visit with Santa.

In yesterday’s column, I revealed that there were no Knoxville obituaries for young boys in the November period which had been sited, and now that Santa’s story has changed, there are still no death notices from October which appear to be consistent with this story.

I don’t claim to know what really happened here. However, on today’s Glenn Beck program I put forward the theory that the key to unravelling this may be in the wife’s visit to Nashville and why it was that “Santa” really wanted to stay in Knoxville and then got sucked into a story to justify that decision which eventually snowballed out of control.

So typical of this era of the broken news media, I am becoming convinced that we will never really know for sure what did or did not happen here. It is hard to imagine why the parents or the nurse would come forward now when they have not as of yet (why would a parent of a child who died months ago not love to have their child’s memory forever associated with this story?!) And with “Santa” taking a page out of Trump’s playbook by sticking to his story while blaming the media for attacking him, there will be plenty of like-minded people (especially in Tennessee) who will stick by him and probably even allow his business to prosper.

My guess is that this story will be never be fully verified or debunked enough to satisfy those who want it to be true. In the end, everyone will simply be left to believe whatever it is that they want to believe, with the truth meaning nothing.

In a very real sense, this whole clusterfark is the perfect story to wrap up the year of 2016.